Home Around the House California did something right (for once?)

Many of us dream of a retirement career that satisfies our inner needs rather than our physical ones. Like Mark Stambler in Los Angeles who baked delicious bread from home in a steam bakehouse he built himself. And then got shut down by the health police for failing to use a properly permitted facility.

Read all about him here.

He got mad and became a very active activist! Over the next year he made such a noise he attacked the attention of Californian state rep who decided he was right, and would help to change the state’s cottage food laws, which allow homemade food to be sold.   To qualify as a cottage food, it must be designated by the state as “non-potentially hazardous,” meaning it has a low risk of spreading bacteria.

Stambler helped Assemblyman Gatto draft the California Homemade Food Act (AB 1616) to legalize cottage food.  AB 1616 was overwhelmingly popular with lawmakers, passing the California State Assembly 60 to 16 and unanimously passing the state Senate in August 2012.  Upon signing the bill, Gov. Jerry Brown praised AB 1616 as a way to “make it easier for people to do business in California.”

Guess what? When Stambler went back into business his bread sold like – well, hot cakes, – and he never received a single complaint. And California has now approved over 1,200 home food businesses.

How about your state? 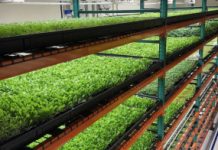