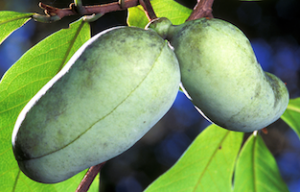 What I am used to calling the paw paw fruit is actually the tropical papaya (Carica papaya). It’s delicious and orange. So, I was surprised when folks began telling me about a native American fruit that’s also called the pawpaw (Asimina triloba). It has some local nicknames like the Appalachian banana and the “poor man’s banana” which are references to its taste. It grows in 26 states, although it does best in the Northeast and the Midwest, and it hasn’t been farmed much because the fruit spoils and doesn’t travel well. It’s great, low-maintenance addition to your garden as it is naturally insect-resistant.

The fruit of the common pawpaw is a large edible berry – like a wonky pear -2.0–6.3 in long and 1.2–2.8 inches wide, weighing from 0.71–17.64 oz, with numerous seeds; it is green when unripe, maturing to yellow or brown. It has a flavor somewhat similar to both banana and mango, varying significantly by grower, and has more protein than most fruits. It ripens in late Summer, early Fall. The fruit can be cooked or eaten fresh. Pawpaw has historically been used for food, fishing nets (the inner bark is very fibrous), and medicine.

It’s the largest indigenous fruit on the continent and it is believed by many, including many First Peoples to have medicinal properties.

Pawpaw foliage exhibits pesticidal activities and in an experiment a caterpillar-laden tree was sprayed with a pawpaw bark extract and 30 minutes later the majority of insects had died and fallen from the tree. Phlox plants infested with mildew fungus were also sprayed with pawpaw preparation and 10 days later improvement was markedly observed. The pawpaw tree is usually insect- or disease-resistant because of its acetogenin content, which deters the feeding of many organisms.