Home Government National Security Is this the missile North Korea will launch at Americans? 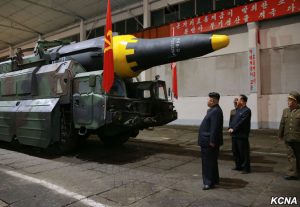 The dictatorship of North Korea successfully tested a new missile that appears to have greater range than anything they’ve fired before.

The regime claims it is a new class of Hwasong missile, and one that can carry a large nuclear warhead.

The missile was launched at the highest angle so as not to affect the security of neighboring countries and flew 787 kilometers (490 miles) reaching an altitude of 2,111.5 kilometers (1,312 miles), KCNA said.

Experts said the altitude reached by the missile tested on Sunday meant it was launched at a high trajectory, which would limit the lateral distance it traveled. But if it was fired at a standard trajectory, it would have a range of at least 4,000 km (2,500 miles), experts said.

Two things about it appear to make it more threatening than ever.

While this missile landed only 439 miles away, it reached an altitude of over 1,300 miles.  North Korea has long had the ability to strike targets in Japan, including U.S. forces there.  This greater ability to strike from increased altitude means North Korean missiles can hit a target at a sharper angle, helping it evade anti-missile systems.

The ability to carry larger and larger warheads is a top concern.  North Korea has 30 nuclear warheads, but none small enough to be carried by any of their missiles.  Efforts to build larger missiles may succeed before their efforts to miniaturize warheads do.