Memorial Day remembers all our conflicts. The largely European War known as “World War I,” “The War to end all Wars” and “The Great War” was devastating. The total number of military and civilian casualties in World War I was more than 38 million: there were over 17 million deaths and 20 million wounded, ranking it among the deadliest conflicts in human history. The total number of deaths includes about 11 million military personnel and about 7 million civilians. Americans death totaled around 116,708, and wounded around 204,000. 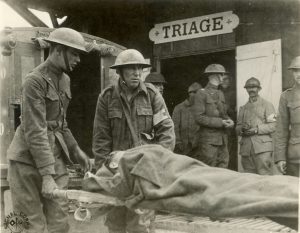 Apr. 6 was the 100th anniversary of the entry of the United States into the Great War in Europe, now known as World War I (WWI). Congress passed its Declaration of War on that date in 1917.

On this day, it’s an appropriate time to ask, what was the long-term impact of WWI on the US? In a word, “Immense.”

The War Industries Board ran American industry during the war, subjecting businesses to its orders according to government’s prerogatives.

To the state, war is afferent, the centripetal effect that pulls power to the center. WWI established that principle in the US as the national government experimented in top-down economic and political control and became enamored with it. When the next “war” came–the 1930s Great Depression, an antagonist that appeared indestructible–a centrally managed command structure came into being and received only tepid opposition. Apr. 6, 1917 opened the way for the New Deal.

The course of the journey is traced in the 1935 book The Blue Eagle From Egg to Earth by Gen. Hugh S. Johnson. It is an autobiographical work rather than a historical examination, but Johnson was in the center of developments from war to war and presents a revealing perspective. In 1933 he was named administrator of the New Deal’s National Recovery Administration (NRA), a grandiose attempt to revive the economy that employed a “Blue Eagle” logo as a propaganda tool.

Johnson was a 1903 U. S. Military Academy (West Point) graduate who earned law degrees during his rise in the ranks and was stationed in a Washington, DC post in 1916. He displayed organizational abilities in helping set up the WWI draft, then later worked closely with the civilian War Industries Board when it was in its glory days under the direction of former Wall Street financier Bernard M. Baruch. The Board ran American industry during the war, subjecting businesses to its orders according to government’s prerogatives.

Johnson was an ardent admirer of “Bernie,” who “had not only foreseen the war but also the necessity for a vast industrial mobilization to an extent nobody else had imagined” [p. 113]. According to Johnson, Baruch was the ideal chief executive of “industrial mobilization with plenary authority from the President” [p.113]. He possessed “a subconscious, or at least unconscious process of reasoning with lightning rapidity” [p. 112] and grounded his problem-solving genius in deep knowledge.

“In this crisis, and especially in this political year, divided powers were wholly inadequate. The sole cure was singleness of control and immediate action.”

Observers noted of his management style “what amazing tact and absence of friction he handled one great problem after another” [p. 113]. Industrial production soared under Baruch’s command. Johnson also received notice and credit for his supplementary role.

After the war, Baruch added to his personal fortune and presciently got out of the stock market before the 1929 crash. Meanwhile, Johnson was re-cementing his links with Baruch. Along with many others, he was also observing the Fascist experiment in Italy and the changes that the dictator Benito Mussolini was making.

On June 20, 1932, with the economic downturn showing no outward signs of relenting, Johnson privately published a tract titled as “A Proclamation” by “Muscleinny, Dictator pro tem,” in which he outlined 11 acts he would impose and provided a rationale for them.

The general reasoning was the the threat of “immediate ruin of our country,” which was “entirely avoidable and unnecessary. In this crisis, and especially in this political year, divided powers were wholly inadequate. The sole cure was singleness of control and immediate action” [p.125].

The legislation authorized and encouraged industries to engage in collusion.

On Sept. 23, 1932, Presidential candidate Franklin D. Roosevelt himself declared before the Commonwealth Club in San Francisco that the age of individualism was over and a powerful administrative state had to take over. Baruch had become a close advisor of Roosevelt, and Johnson was also part of the team. They and other members of Roosevelt’s “Brain Trust” drafted the National Industrial Recovery Act (NIRA). Congress pushed it through within the first 100 days of Roosevelt’s administration in 1933. He created the National Recovery Administration to administer it and appointed Johnson as its head.

The legislation authorized and encouraged industries to engage in collusion. They were to draw up their own “codes of fair competition” that enabled them to raise and fix prices and wage rates applicable to all. Government, in contravening earlier anti-trust laws, became the supervisor and overall planner of the business participants in the economy. As the codes were drafted, the developing committees in the respective industries submitted them to Johnson and his aides for evaluation and modification. The NRA issued hordes of regulations.

The Blue Eagle reinforced the mentality that the state is a higher power than what the individualist-minded founders of the Republic intended.

The entire system was voluntary, and Henry Ford was a notable non-participant, but the Blue Eagle symbol was a prodding force for conformity. Large and small businesses that joined the program got to display the Blue Eagle at their sites and in their promotions as a kind of badge of patriotism. Those who didn’t drew attention to themselves as dissidents and invited retaliation including boycotts. Wartime mobilization was the metaphor, and displaying the Blue Eagle was a way of not giving aid and comfort to the enemy.

The NRA turned into a bureaucratic nightmare beyond the scope of Johnson to handle. His increasingly erratic behavior and mysterious periods of unavailability led to his resignation as administrator Sept. 24, 1934. Meanwhile, the NIRA itself was subjected to legal challenge, and the US Supreme Court ruled it unconstitutional on May 27, 1935.

The Blue Eagle came to earth, but, apart from Constitutional distractions, it reinforced the mentality established during World War I that the state is a higher power than what the individualist-minded founders of the Republic intended, that business is not to be trusted to do the right thing on its own, that the private sector needs to be subordinated to the superior overarching management of the public sector. In short, centralized government should run the show.

Daniel Hager is a writer and consultant in Montgomery, Illinois.