When I was little, mom would leave detailed lists of chores on the kitchen counter each summer morning for my siblings and me to complete before we could play baseball, ride bikes, or go swimming.

And when I arrived at college, basically everyone with whom I became friends, a group from a wide range of socioeconomic backgrounds, had also done real work growing up.

Not everyone had worked in the field like I had—most had spent summers in retail or taking orders at a fast-food place or sorting the mail or doing some other kind of grunt work at a local office—but it was at least a job with certain expectations and set hours.

I didn’t presume everyone was as gritty as Elda Sasse, but I knew that my siblings and I hoped we would one day prove as perseverant as she was—and I honestly believed that this was a universal aspiration.

Without deliberate reflection, I assumed that basically all young people everywhere had similar placeholder role models in their minds, and thus that the transmission of a work ethic to each next generation was more or less inevitable.

My passive assumption that all kids have some meaningful work experiences as teens was shattered in late 2009 when I arrived as president of Midland University.

The university’s board of directors had hired me, as a 37-year-old, not because I had any special insight into shaping 18- to 22-year-olds, but because I was a “turnaround” guy who specialized in helping troubled companies become solvent.

This liberal arts institution was in big trouble, in terms of both finances and enrollment, the latter at its lowest point in a century.

My job was to tackle the college’s unsustainable deficits, skyrocketing debt, enrollment shortfalls, and flagging morale among faculty and staff. None of my initial charter had anything to do with current students and their emotional health.

Immediately upon arrival, however, it became apparent that in addition to dealing with other so-called “big picture” concerns of a university in crisis, I would also have to reshape the student affairs leadership and structure.

When my team and I arrived at Midland, the school had been on the verge of missing payroll four months in a row, which would mean that families would miss mortgage payments. That’s a pretty urgent crisis.

Yet finances might not have been the biggest problem at the school.

More stunning to me was that it was an atypical experience for an incoming freshman to have done really hard work, not even the sorts of elementary farm tasks common to Nebraska kids from the homesteaders of the 1860s until just a few years ago.

Teenage life, I soon learned, had been stunningly remade in the two decades since I’d gone off to college. Elda’s and Elmer’s childhoods were far removed from these kids’ experiences and understanding.

>>> Purchase Sen. Ben Sasse’s book, “The Vanishing American Adult: Our Coming-of-Age Crisis and How to Rebuild a Culture of Self-Reliance.”

Let’s be clear that there were many wonderful human beings and delightful students at Midland, but many of the teens I met upon arriving on campus also had an outsized sense of entitlement without any corresponding notion of accountability.

For example, a student staged a sit-in in my office one day, announcing that he would not leave until I resolved a scheduling problem for him. He was upset that the registrar wouldn’t be offering a particular course he needed the following semester.

The student was emphatic that he wasn’t leaving, and while I was clear that the course registrar had a job to do and that she did it well, I realized it might be a teachable moment, a chance for the student and me to have a conversation.

At one point he proclaimed, “You need to figure this out. I pay tuition to go to this school, which means I pay your salary. So you work for me.”

Well, ummm… no. That isn’t how it works at all. My job did include serving him, but in a defined way. It was not my job, for instance, to wash his car or fetch him pizza on Friday night.

I patiently explained that Midland exists for many people and many purposes; the board of directors hired me; and I serve at their pleasure—but that my leadership of the institution as a whole relies on my empowering a team of people to fulfill their specialized vocations.

I then gently pointed out to the student that he was attending the university on scholarship. In truth then, he worked for—or had a debt to—the generous donors who made his scholarship possible.

But even if he’d been paying for his education himself, the college is a living institution of partners, with thought-out, intentional divisions of labor.

He was approaching the situation and this whole living-learning-working community only as a consumer. He was not thinking or talking or acting like a maturing young man aware of the dignity of the work of the many other people in the equation.

During the five years I was president, we conducted surveys annually about the highs and lows of students’ university experience.

The survey takeaway that repeatedly woke me in the middle of the night was the aching sense not just that the students lacked a work ethic, but more fundamentally that they lacked an experiential understanding of the difference between production and consumption.

Dispiritingly, students overwhelmingly highlighted their desire for freedom from responsibilities. The activities they most enjoyed, they reported, were sleeping in, skipping class, and partying. A few mentioned canceled classes as the best part of their four years.

I too love a good Midwestern blizzard, but I loved them in college so that we could explore the beauty, or ski, or snowmobile—rather than merely be free from class.

Almost nowhere did the student surveys reveal that they had the eyes to see freedom to categories—to read, to learn, to be coached, to be mentored in an internship.

If you have done any real work, you begin to see a broad range of work differently. And if you’ve been reflective about your and other people’s work, you start to ask questions about where goods and services come from.

Who did the work that got these non-Nebraska items to this store in this Nebraska small town?

As hard work is baked into your bones, you begin to feel great gratitude for the other workers who built the stuff and plotted the distribution system that got these toasters and sneakers and books to this place.

On the other hand, if you’ve never worked, you are more likely blind to the fundamental distinction between production and consumption. And these students, I learned from interviewing many of them, had mostly not done any hard work prior to arriving in college.

Although it is not universally fair, millennials have acquired a collective reputation as needy, undisciplined, coddled, presumptuous, and lacking much of a filter between their public personas and their inner lives.

As one New York Times story about millennials in the workplace put it, managers struggle with their young employees’ “sense of entitlement, a tendency to overshare on social media, and frankness verging on insubordination.” 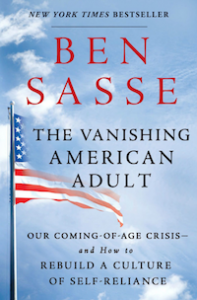 “Well, what’s the alternative? Are you asking us to be fake?” one young woman asked me after a speech in which I’d made a passing comment about the virtues of “deferred gratification.”

No, of course not. Of course we all struggle with selfishness, and of course there are times to simply have fun, avoid responsibility, and seek escape—or perhaps, as noted in the last chapter, to pause the daily churn to reflect.

But growing up involves coming to recognize the distinction between who we still are today and who we seek to become. Our hope is that our young people will begin to own the Augustinian awareness that not everything we long or lust for is something we should really want.

Healthy people can admit that there are unhealthy yearnings. It is not “fake” to aim to mature. And it is not fake to begin modeling the desired behavior even before it is a full and fair representation of who you are in the moment.

I remain selfish and impatient today, but it is surely not fake or wrong to seek to sublimate these traits. I want to grow beyond who I am today, and I aim to begin better modeling that idealized future right now.