Madagascar is a large island off SE Africa. It frequently reports cases of bubonic and pneumonic plague which are spread by rodents and are difficult to treat and contain. This current outbreak is unusual, however, as it is spreading rapidly. It started in August, when a 31-year-old man misdiagnosed with malaria traveled through the capital, Antananarivo.

He died en route and “a large cluster of infections” broke out among his contacts, according to a W.H.O. update issued on October 4th. Those contacts passed it on to others.

As of 3 October 2017, a total of 194 cases (suspected, probable and confirmed) with 30 deaths reported from 20 districts in 10 regions. Of these, 124 cases and 21 deaths had the pneumonic form of the disease. Eight healthcare workers from one health facility in Tamatave have contracted pneumonic plague.

More than 50 million people in Europe were killed by the Black Death in the 1300s, which many historians believe was caused by several killer diseases including the pneumonic and bubonic plague.

Pneumonic plague is a severe lung infection caused by the bacterium Yersinia pestis. Symptoms include fever, headache, shortness of breath, chest pain, and cough. They typically start about three to seven days after exposure. The plague has fatality rates of 30 to 100 per cent if untreated and the pneumonic strand is transmitted person to person by air, making it more difficult to control. WHO describes pneumonic plague as “the deadliest and most rapid form of plague”.

Bubonic plague is spread via infected fleas and small animals. It can result from bites or exposure to the body fluids of dead, plague-infected animals. It can enter through the skin by a flea bite and travel to the lymph system. Treatment with antibiotics must occur within the first 24 hours of symptoms. The mortality rate for those treated ranges from 1-15%, but for untreated patients, ranges from 40-60%. It is the most common form found in Madagascar.

Septicemic plague is the rarest form of plague and is nearly always fatal without treatment. It attacks the bloodstream. Treatment must begin immediately after symptoms have shown or it will be too late. It is transmitted from flea bites, rodent bites, or mammal bites from infected creatures.

The concern is that, with modern travel, the plague will not stay contained on the island, but will spread across international flight paths. Here’s how to prepare. 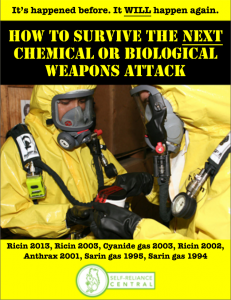 Here at Self-Reliance Central we have created an in-depth report for dealing with biological threats when used as weapons.

In this case, the spread of the pneumonic plague appears to be naturally occurring, but the remedial actions you must take are the same.

Please download my FREE REPORT HERE and be prepared should this deadly disease get on a plane and arrive at a town near you.