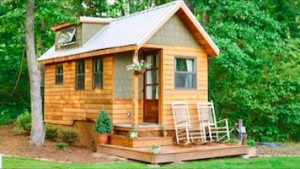 You’d think that the new fad for tiny homes (defined as less than 500 square feet) would find favor with authorities. They have a small carbon footprint, they provide shelter for people cheaply, meaning they’re less likely to become the responsibility of taxpayers, they’re a useful addition for families trying to house elders, they are less likely to have offset able mortgage interest, and they encourage people to downsize and get rid of their stuff sooner rather than later into the waste stream. (more reasons in this cool article here.)

But, no. We have lingering regulations that often make these homes illegal.

“As of now, few cities allow stand-alone tiny houses. Most communities have minimum square footage requirements for single-family homes mandating that smaller dwellings be an “accessory” to a larger, traditional house. Many also have rules requiring that dwellings be hooked up to utilities, which is a problem for tiny-house enthusiasts who want to live off the grid by using alternative energy sources such as solar panels and rainwater catchment systems.”

Seems the reality is that many governments around the country either ban tiny homes or force them to be connected to the utility grid, or fail them on other building code violations.

Some of the more recent examples of explicit bans include Etowah, TN and Wasilla, AK, which don’t allow homes less than 600 square feet and 700 square feet, respectively. Wait! Wasilla? The rugged Alaskan community made famous by Sarah Palin? They’re letting governments tell them small dwellings are a no-no? How can that be? If you know, please leave a comment.

According to PBS: Some local governments around the country are welcoming tiny houses, attracted by their potential to ease an affordable housing crunch or even house the homeless. Cities such as Washington, D.C., and Fresno, California, have eased zoning and building rules to allow them, and in May California’s housing department issued guidance to help builders and code enforcers know which standards they need to meet.

Thoughts? And remember we have Tiny Homes featured all over our website. Click here to see some: https://selfreliancecentral.com/?s=Tiny+Homes