Home Technology Comms Will calling 112 tell if that’s REALLY a cop car behind you? 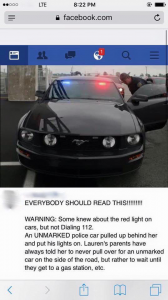 There’s a post making the rounds on Facebook with an urgent message telling people that if you are pulled over by an unmarked police car, call 112 for help.  It says that the operator will let you know whether it’s a real cop car or not.

The emergency number in many European countries is 112 – it’s their 911 – so cellphone manufacturers have set up the phones to call it in an emergency without unlocking the phone. In the US, many police jurisdictions will pick up on the number and forward the call to 911 services. This does not happen in all police jurisdictions, for instance in the District of Columbia.

Since 112 is not designated as a universal emergency number in the U.S., calling 911 directly is the better option. Some police agencies have even issued social media warnings advising the public not to call 112 at all, saying that “the (idea) that calling 1-1-2 is somehow faster than calling 9-1-1 is utterly false.”

Just as some highways ask you to call #77 if there’s a highway emergency, it’s not the same in all states. Rather than work out what number to call, all police agencies advise calling 911 and letting them deal with it.

In many states, dialing “211” provides individuals and families in need with a shortcut through what can be a bewildering maze of health and human service agency phone numbers.  By simply dialing 211, those in need of assistance can be referred, and sometimes connected, to appropriate agencies and community organizations.

Dialing 211 helps direct callers to services for, among others, the elderly, the disabled, those who do not speak English, those with a personal crisis, those with limited reading skills, and those who are new to their communities.

2-1-1 is available to approximately 270 million people, or about 90% of the total U.S. population. It covers all 50 states (including 41 states with more than 90 percent coverage), the District of Columbia, and Puerto Rico. To find out whether 211 services are offered in your area and to obtain more information, visit www.211.org.

211 works a bit like 911.  Calls to 211 are routed by the local telephone company to a local or regional calling center.  The 211 center’s referral specialists receive requests from callers, access databases of resources available from private and public health and human service agencies, match the callers’ needs to available resources, and link or refer them directly to an agency or organization that can help.

Types of Referrals Offered by 211