Home APPROPRIATE UK USE A visit from the Leech – some ancient cures that still work...

There’s a book in the British Library called Bald’s Leechbook. It’s an Old English leatherbound, medical textbook, encouraged under King Alfred’s reign of enlightenment during the Anglo-Saxon period of British history. A Leech, in this case, refers to a ‘doctor’ or medical professional.

According to some research conducted through the University of Nottingham in the UK, a one thousand year-old Anglo-Saxon remedy for eye infections found in Bald’s book, has been found to kill the modern-day superbug MRSA. And not just a little bit – it has an astounding kill rate.

Dr Christina Lee, an Anglo-Saxon expert from the School of English enlisted the help of microbiologists from University’s Centre for Biomolecular Sciences to recreate the 10th century potion for eye infections from Bald’s Leechbook  volume in the British Library, to see if it really works as an antibacterial remedy. The video of their sleuthing and experimenting is shown below.

The Leechbook is widely thought of as one of the earliest known medical textbooks and contains Anglo-Saxon medical advice and recipes for medicines, salves and treatments.

Early results on the eye salve ‘potion’, tested in vitro at Nottingham and backed up by mouse model tests at a university in the United States, are, in the words of the US collaborator, “astonishing”. The solution has had remarkable effects on Methicillin-resistant Staphylococcus aureus (MRSA) which is one of the most antibiotic-resistant bugs costing modern health services billions.

Want to make it? Here’s the recipe.

As we’ve covered before the world is hovering on the brink of post-antibiotic treatments. The last known antibiotic was just beaten China where scientists identified bacteria able to shrug off the drug of last resort – colistin.

While scientists and Big Pharma race to find other treatments, such as gene therapy, nanotechnology, immune boosting, antimicrobial peptides (AMPs) and training ‘good bacteria’ to eat ‘bad bacteria’ we want to look at some old-fashioned treatments.

Like Colloidal Silver, which we cover in detail here. It’s a powerful, natural antibiotic and preventative against infections. Acting as a catalyst, it reportedly disables the enzyme that one-celled bacteria, viruses and fungi need for their oxygen metabolism. They suffocate without corresponding harm occurring to human enzymes or parts of the human body chemistry. The result is the destruction of disease-causing organisms in the body and in the food. 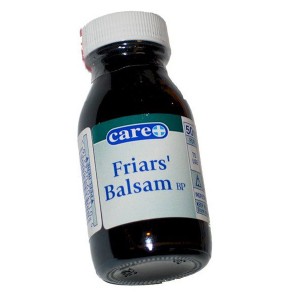 Like Friar’s Balsam, a substance my father used to apply to the wings of birds when he’d find one that was injured in our yard.

It’s also called tincture of benzoin and it has two main medical uses: as a treatment for damaged skin in the “Compound” form, and as an inhalant in the non-Compound form.

Compound Tincture of Benzoin (CTB) can be applied to minor cuts as a styptic and antiseptic (an effect of both the benzoin and its alcohol solvent). It’s great on cracked, chapped or fissured skin and it relieves the itch associated with bedsore, chilblains and eczema. If it stings, the recommendation is to dilute it 50/50 with water or glycerin.

CTB is often applied to skin before applying tape or other adhesive bandages. To some degree, it protects the skin from allergy to the adhesive in the tape or bandage, but mostly it makes the tape or bandages adhere much longer. It is also used by athletes for its reputation of toughening skin exposed to the tincture. Orthopedists applying a cast often spray CTB in an aerosol can onto skin before casting, as it protects the skin under the cast, and reduces itching.

As plain Tincture of Benzoin, it is also used to soothe recurring canker sores, fever blisters, and the like. Again, if it stings, cut it with some glycerin.

Plain Tincture of Benzoin can also be inhaled in steam as a treatment for various conditions including bronchitis and colds. There is some disagreement as to whether or not benzoin should be used as a treatment for asthma but it’s great for a congested chest. (Don’t do this if you’re pregnant. The effects are not well documented.)

It is also used in the U.S. military to treat blisters. A common treatment utilized by medics in the U.S. Army is to drain the fluid from a blister and to inject the same amount of compound tincture of benzoin, to help seal the space created by the blister, to serve as a local antiseptic, and to prevent further abrasion or loss of skin. This is commonly known as a “hot shot” amongst military personnel due to the extreme burning sensation that will be experienced for several moments when the tincture is applied!