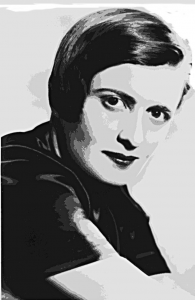 I’ve always found it interesting that we celebrate the birthdays of so many scoundrels and charlatans whose actions have brought poverty, misery, and even death to millions of individuals, yet ignore people who have made enormous contributions to mankind, says Robert Ringer.

+Robert Ringer is an American icon whose unique insights into life have helped millions of readers worldwide. He is also the author of two New York Times #1 bestselling books, both of which have been listed by The New York Times among the 15 best-selling motivational books of all time.

Included in the latter group is the legendary Ayn Rand, a writer/philosopher who was decades ahead of her time.  February 2, 2018, was the 113th anniversary of her birth, but it’s unlikely you will hear her name mentioned in the news.  Nevertheless, Ayn Rand lives on as a symbol of resistance to the insidious concept of the state.

To be sure, Rand remains a controversial figure, revered by millions and hated by millions more.  While there is no question that she went off the deep end in her later years, lashing out with a seemingly cruel vindictiveness against anyone who dared to question her ideas, her contributions to the cause of liberty were enormous.

Many who knew Ayn Rand personally believed she was a megalomaniac, sociopath, and narcissist who was incapable of normal human interaction.  Perhaps.  But she also was a pure genius who was 100 percent right in her belief that the individual is a sovereign entity.

Ayn Rand’s name is, in fact, virtually synonymous with individualism, the term used to convey the belief that every person is an independent, sovereign entity who possesses an inalienable right to his own life.  (Her overarching philosophy is objectivism, which is similar to individualism but more complex.  It is the belief that people are sovereign due to their rationality — their ability to choose what knowledge they will gain and how they will lead their lives.)

Individualism holds that a civilized society can be achieved only through recognition of individual rights, and that a group has no rights other than the individual rights of its members.  It rejects the notion of a collective good and emphasizes the sovereignty and worth of the individual.  In other words, the individual is supreme when it comes to his own life.

With this in mind, it’s important to point out that Nazism and communism are not at opposite ends of the ideological spectrum, as most people believe.  On the contrary, they are linked at their ideological hips, because both are dictatorships that suppress all opposition and criticism.  Further, both believe in the principle of collectivism — the idea that the collective (society, the community, the nation, the proletariat, etc.) has primacy over the individual.

The reality is that whether they operate under the guise of Nazism, communism, or “democracy” (which is nothing more than tyranny of the majority), governments, by their very nature, are tethered to the collective good.  All believe, to one extent or another, that the individual should be sacrificed for the good of the collective whenever the state (i.e., those individuals who hold the reins of power) believes it to be in the best interest of “society.”

Benito Mussolini, whom Hitler idolized in the early years of his career, proclaimed himself to be a proud communist throughout his reign of terror.  Yet scholars continue to teach foggy-minded students that fascism and communism are at opposite ends of the ideological spectrum.  The truth, technically speaking, is that communism is actually just another form of fascism.

Little wonder that university students and intellectuals were among Hitler’s staunchest supporters.  When voters gave the Nazi Party 44 percent of the vote in 1933, they were well aware of the Nazi ideology, because it had been published and widely read, including in Hitler’s infamous Mein Kampf, which sold more than 200,000 copies.  Also, even though German citizens were free to leave the country until the onset of World War II, the fact that few chose to do so speaks worlds about their beliefs.

In one of Hitler’s many diatribes on the moral superiority of the state over the individual, he proclaimed:

It is thus necessary that the individual should finally come to realize that his own ego is of no importance in comparison with the existence of his nation; that the position of the individual ego is conditioned solely by the interests of the nation as a whole … that above all, the unity of a nation’s spirit and will are worth far more than the freedom of the spirit and will of an individual.

In other words, statists reject the right of the individual to pursue his own happiness without regard to others, as it believes that “society” is superior to any one person.  On the surface, of course, statists sound like the good guys.  After all, they believe in such righteous abstracts as “the good of society,” “shared prosperity,” and the moral goodness of people receiving government benefits “according to their needs.”

Who would buy into such immoral, abstract tripe?  Answer:  The vast majority of people.  You don’t need to conduct a scientific survey to know that a majority of the world’s population rejects the concept of individualism.  This wholesale rejection of natural rights has given birth to such barbaric dictatorships as Stalin’s Soviet Union, Hitler’s Germany, and Mao’s China.

It should not come as a surprise to anyone that all of these collectivist nations evolved into human slaughterhouses, given that the only way to bring into submission those who refuse to accept the idea of sacrificing for “the common good” is to apply brute force.

Of course, in actual practice the common good has always turned out to be nothing more than doublespeak, because in 100 percent of the cases where ironfisted statism has been implemented, the masses have ended up with wretched lives of quiet desperation, while political leaders, along with their hacks and cronies, have enjoyed lives of luxury and dictatorial power over them.

In his classic novel Animal Farm, George Orwell summed up this reality with these clever and insightful words:  “All animals are equal, but some animals are more equal than others.”  Bullseye on the subject of collectivism!

So today, Ayn Rand’s 113th birthday, let us renew our efforts to promote the sanctity of the individual and eschew the fiendish concept of collectivism.  The true individualist does not want to run anyone else’s life and does not want anyone run his life.  He desires neither to rule or be ruled.  He has no interest in sacrificing himself to others — especially the “collective” — and has no desire for others to sacrifice themselves to him.

On that note, I’d like to take this opportunity to wish the humanly flawed but brilliant Ayn Rand a happy 113th birthday, wherever she may be, and to proclaim in her honor:  Long live individualism!