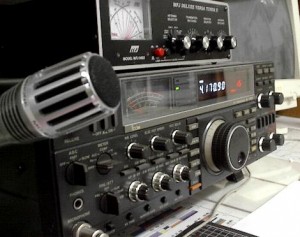 A few years back I took the classes and sat the exam for my Level 1, Technician License through the American Radio Relay League (AARL) which schooled me in the basic use of ham radio. I am now entitled to operate a radio on shortwave, VHF+ and some HF frequencies. I could have gone further, but the Boy Scouts who coached me had probably had enough of me by then!

I was scratching in the depths of my memory for the physics classes I’d half-heartedly attended in my youth to recall Ohm’s Law when all I wanted to do was know how to use the clouds to bounce a radio signal in the event of a really bad emergency. And thank goodness they have dumped the Morse proficiency requirement for Technicians!

But it was worth it. I can now legally use an amateur radio with my unique callsign. Amateur Radio (ham radio) is a popular hobby and service that brings people, electronics and communication together. People use ham radio to talk across town, around the world, or even into space, all without the internet or cell phones.

Amateur radio operators, using their car engine, or battery- or generator-powered equipment, often provide essential communications services when regular channels are unavailable due to natural disaster or other disruptive events. Natural disasters like hurricanes or tornadoes disrupt normal telephone and cell phone systems. So ham radio operators can pitch in to help with emergency communications, and you will often hear about them on news reports.

A typical ham radio is a transmitter and a receiver, usually purchased as one unit, called a transceiver. Newer transceiver models often have semi-complicated controls and menu systems that may take some reading of the manual. You may be able to find an older transceiver with controls that are easier to use as a beginner, having analog controls that make more intuitive sense. Whatever you get, the ham community is friendly and helpful som once you have your license you can join a local club or get on air and ask quick questions. (Don’t become an air hog!)

Hand-held transceivers have their own antennas. Many hams choose to do most of their operating from their automobile during commute times, using a magnetic mount antenna connected to an under-dash transceiver or a hand-held radio. You can often tell these operators by the huge antenna or the license tag giveaway! Little whip antennas, wire antennas in trees, and antennas atop a tower are all used, depending on the frequency in use. Lower frequencies have longer wavelengths. Longer wavelengths need larger antennas. The same antennas (used to transmit and receive) can be small, portable, put in trees or on the trunk of a car. In the wilds you can shoot an antenna over a tree to get maximum line-of-sight connectivity.

Linked repeater systems allow transmissions of VHF and higher frequencies across thousands of miles (although more often hundreds). Repeating stations, “repeaters’ are usually located on heights of land or tall structures and allow operators to communicate using hand-held or mobile transceivers. Nowadays cell towers also carry a repeater and many public building host one or two. Repeaters can also be linked together by using other amateur radio bands, landline, or if it’s working, the internet.

If there’s enough interest maybe we could put together a Self-Reliance Central group? Any takers? I really do have to practice more!

Where to get your license

Find an Amateur Radio License Exam in Your Area

The FCC Technician License exam covers basic regulations, operating practices and electronics theory, with a focus on VHF and UHF applications. Morse code is not required for this license. With a Technician Class license, you will have all ham radio privileges above 30 MHz. These privileges include the very popular 2-meter band. Many Technician licensees enjoy using small (2 meter) hand-held radios to stay in touch with other hams in their area. Technicians may operate FM voice, digital packet (computers), television, single-sideband voice and several other interesting modes. You can even make international radio contacts via satellites, using relatively simple station equipment. Technician licensees now also have additional privileges on certain HF frequencies. Technicians may also operate on the 80, 40 and 15 meter bands using CW, and on the 10 meter band using CW, voice and digital modes.

Before you can get on the air, you need to be licensed and know the rules to operate legally. US licenses are good for 10 years before renewal and anyone may hold one except a representative of a foreign government.