Police officers are some of the best-trained and self-sacrificing public servants.

But they’re also human. They can’t be everywhere, all the time. And when they are, some screw up.

On Tuesday, over a year after the shooting, he was arrested and booked

Scot Peterson, 56, was arrested Tuesday and charged with seven counts of neglect of a child, three counts of culpable negligence, and one count of perjury, according to the Florida Department of Law Enforcement.

Florida Department of Law Enforcement Commissioner Rick Swearingen said Peterson did “absolutely nothing” to stop the shooting, which killed 17 and injured 17 others.

“There can be no excuse for his complete inaction and no question that his inaction cost lives,” Swearingen added.

This is why you can’t just assume the police, or even private security, will protect you in the event of a crime or mass shooting.

Your protection is your responsibility, which is why more and more people are carrying concealed, or openly, and training to use their weapons in a self-defense situation.

What are you doing to protect yourself in public? Tell us in the comments.

Once again, an armed citizen saves the day 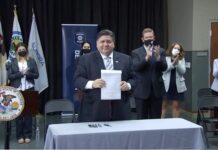