Christopher Grant is a hero.

When a disturbed man walked into an El Paso Walmart and opened fire on shoppers, Grant tried to stop the melee by throwing bottles at the killer.

“I saw him standing in the parking lot..and I saw him popping people off,” said Grant. “And I was inside the produce department which is right by the front door…So to deter him I started just chucking bottles, random bottles at him. And I’m not a baseball player, so one went this way one went that way. And then one went right towards him and then that’s when he saw me.”

The shooter, who had been specifically aiming at Hispanics, then targeted Grant, who was seriously wounded in the exchange.

“And I ducked, I was behind the chips…and he just ‘boop boop boop’ started firing off rounds at me,” said Grant. “So when I got hit it was like somebody put a hand grenade in my back and then pulled the pin. That’s what it felt like.”

“I did what any good man would’ve done,” he added.

But in an interview with CNN’s Chris Cuomo from his hospital bed, Grant reveals the tragedy could have been stopped if his mother, who was with him that day, had been carrying her handgun.

GRANT: “I heard gunshots, and I knew what it was. So I ran towards my mother to try and shield her, so I’m like ‘Mom!’ — cause my mom she’s a gun-wielding Grandma. She carries a snubnosed Smith and Weston .38 special with a built-in scope in it., everywhere she goes.”

GRANT: “An hour before we go to Walmart, she decided ‘Oh, We’re just going to Walmart. I’m going to put in my room. So when I went to her, no gun. And I’m like ‘Oh my God, you gotta be kidding me,’ and then she took off and it was chaos.

That’s the thing about carrying. The odds are you’ll never need it, but you’ll wish you had if that one-in-a-million event happens.

“Are you pleased to see me or is that a gun in your pocket?” aka ‘My Everyday Carry Gear and Why It’s “Wrong”‘

Not just in Philadelphia! Car jackings like this one are up everywhere! 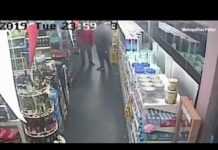 Migrant askes shoppers their nationality – stabs them when he hears this.