A college football referee was hospitalized last week after being shot in the head with a cannon.

The man was officiating Maine Maritime Academy’s homecoming game, who traditionally celebrate touchdowns by firing a cannon loaded with a blank shotgun shell.

A fan, however, brought his own cannon, which he loaded with black powder tamped down with wadding. When he fired the cannon after a MMA touchdown, the wadding struck the referee in the head. Video from the game shows a burst of smoke, and the referee clutching his head as he drops to the ground.

Team trainers and game officials immediately rushed to his aid. He was hospitalized with non-life-threatening injures.

Maine Maritime Academy president William J. Brennan has since released a statement banning fans from bringing their own cannons, warning them “these devices will no longer be permitted on campus for future events.”

The Hancock County Sheriff’s Department is investigating the incident and will deliver a report to the district attorney’s office, who may or may not criminally charge the fan, who school officials did not name but did note was an alumnus.

While people often think of “blanks” as harmless, prop firearms loaded with wadding can cause serious injury or death at close range because of the shockwave from the charge or the blank acting as a projectile. 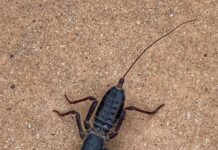 You’re the apex predator – until you’re not!