The Chernobyl disaster was a nuclear accident that occurred 36 years ago, on Saturday 26 April 1986, at the No. 4 nuclear reactor in the Chernobyl Nuclear Power Plant, near the city of Pripyat in the north of the Ukrainian SSR. It is considered the worst nuclear disaster in history and is one of only two nuclear energy disasters rated at seven—the maximum severity—on the International Nuclear Event Scale, the other being the 2011 Fukushima Daiichi nuclear disaster in Japan.

The accident started during a safety test on an RBMK-type nuclear reactor, which was commonly used throughout the Soviet Union. The test was a simulation of an electrical power outage to aid the development of a safety procedure for maintaining reactor cooling water circulation until the back-up electrical generators could provide power. This gap was about one minute and had been identified as a potential safety problem that could cause the nuclear reactor core to overheat. It was hoped to prove that the residual rotational energy in a turbine generator could provide enough power to cover the gap. Three such tests had been conducted since 1982, but they had failed to provide a solution. On this fourth attempt, an unexpected 10-hour delay meant that an unprepared operating shift was on duty. During the planned decrease of reactor power in preparation for the electrical test, the power unexpectedly dropped to a near-zero level. The operators were able to only partially restore the specified test power, which put the reactor in a potentially unstable condition. This risk was not made evident in the operating instructions, so the operators proceeded with the electrical test. Upon test completion, the operators triggered a reactor shutdown, but a combination of unstable conditions and reactor design flaws caused an uncontrolled nuclear chain reaction instead.

A large amount of energy was suddenly released, vaporising superheated cooling water and rupturing the reactor core in a highly destructive steam explosion. This was immediately followed by an open-air reactor core fire that released considerable airborne radioactive contamination for about nine days that precipitated onto parts of the USSR and western Europe, before being finally contained on 4 May 1986. The fire gradually released about the same amount of contamination as the initial explosion.  As a result of rising ambient radiation levels off-site, a 10-kilometre (6.2 mi) radius exclusion zone was created 36 hours after the accident. About 49,000 people were evacuated from the area, primarily from Pripyat. The exclusion zone was later increased to 30 kilometers (19 mi) radius when a further 68,000 people were evacuated from the wider area.

The reactor explosion killed two of the reactor operating staff. In the emergency response that followed, 134 station staff and firemen were hospitalized with acute radiation syndrome due to absorbing high doses of ionizing radiation. Of these 134 people, 28 died in the days to months afterward and approximately 14 suspected radiation-induced cancer deaths followed within the next 10 years. Among the wider population, an excess of 15 childhood thyroid cancer deaths were documented as of 2011. The United Nations Scientific Committee on the Effects of Atomic Radiation (UNSCEAR) has, at multiple times, reviewed all the published research on the incident and found that at present, fewer than 100 documented deaths are likely to be attributable to increased exposure to radiation.

To reduce the spread of radioactive contamination from the wreckage and protect it from weathering, the protective Chernobyl Nuclear Power Plant sarcophagus was built by December 1986. It also provided radiological protection for the crews of the undamaged reactors at the site, which continued operating. Due to the continued deterioration of the sarcophagus, it was further enclosed in 2017 by the Chernobyl New Safe Confinement, (video above) a larger enclosure that allows the removal of both the sarcophagus and the reactor debris, while containing the radioactive hazard. The arch was the successful conclusion of the sliding operation, a key milestone before the finalization of the international program to transform Chernobyl into an environmentally safe and secure state by November 2017. Thirty years after the nuclear disaster in Chernobyl, the radioactive remains of the power plant’s destroyed reactor 4 were safely enclosed following one of the world’s most ambitious engineering projects.

Chernobyl’s giant New Safe Confinement (NSC) was moved over a distance of 327 metres from its assembly point to its final resting place, completely enclosing the previous makeshift shelter that was hastily assembled immediately after the 1986 accident.

Nuclear clean-up is scheduled for completion in 2065.

The Chernobyl disaster is considered the worst nuclear power plant accident in history, both in terms of cost and casualties. The accident resulted in safety upgrades on all remaining Soviet-designed RBMK reactors, of which 10 continue to be operational. 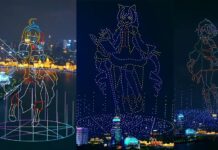