The Asian giant hornet (Vespa mandarinia), including the former subspecies known as the Japanese giant hornet (V. m. japonica) is the world’s largest hornet. It is native to Asia and was only found in the Pacific Northwest in late 2019. It feeds primarily on larger insects, colonies of other eusocial insects, tree sap, and honey from honey bee colonies. The hornet has a body length of 45 mm (1.8 in), a wingspan around 75 mm (3.0 in), and a stinger 6 mm (0.24 in) long, which injects a large amount of potent venom.

It normally lives in the forests and low mountains of eastern and southeast Asia and feeds on large insects, including other wasps and bees. It was dubbed the “Murder Hornet” in Japan, where it is known to kill people.

In April 2020, authorities in Washington state asked members of the public to be alert and report any sightings of these wasps, which are expected to become active in April if they are in the area.  If they become established, it is claimed that the hornets “could decimate bee populations in the United States and establish such a deep presence that all hope for eradication could be lost.” A “full-scale hunt” for the species by the Washington State Department of Agriculture is underway.

Laboratory findings determined that the specimens collected from British Columbia and Washington State were from different colonies, thus confirming that there were two separate introductions of the Asian giant hornet to North America.

And here’s what we think about it!

More about the insatiable Black Rock 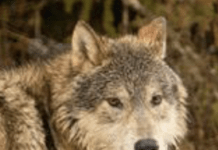 Distinguishing between Coyotes, Wolves and Dogs