Home Asset Protection Other The State With the Greediest Politicians, Part II

Yesterday, in Part I of our series about greedy state politicians, we looked at top income tax rates.

The worst state, not surprisingly, was California with a top tax rate of 13.3 percent.

This onerous tax rate, combined with low-quality government and absurd levels of red tape, helps to explain why so many people have fled the Golden State.

(And because California’s problems are self-inflicted, that’s the biggest reason why the state should not get a bailout from Uncle Sam.)

Today, we’re going to look at another major source of tax revenue for state politicians.

Here are some excerpts from the Tax Foundation’s report on sales tax rates.

While graduated income tax rates and brackets are complex and confusing to many taxpayers, sales taxes are easier to understand; consumers can see their tax burden printed directly on their receipts. In addition to state-level sales taxes, consumers also face local sales taxes in 38 states. These rates can be substantial, so a state with a moderate statewide sales tax rate could actually have a very high combined state and local rate compared to other states. This report provides a population-weighted average of local sales taxes… Five states do not have statewide sales taxes: Alaska, Delaware, Montana, New Hampshire, and Oregon. Of these, Alaska allows localities to charge local sales taxes. The five states with the highest average combined state and local sales tax rates are Tennessee (9.55 percent), Arkansas (9.53 percent), Louisiana (9.52 percent), Washington (9.23 percent), and Alabama (9.22 percent). The five states with the lowest average combined rates are Alaska (1.76 percent), Hawaii (4.44 percent), Wyoming (5.34 percent), Wisconsin (5.43 percent), and Maine (5.50 percent). California has the highest state-level sales tax rate, at 7.25 percent.

Here’s the map that accompanied the report.

It’s good to be gray. By contrast the states with the darkest colors have the most onerous rates.

As noted in the excerpt above, Tennessee, Arkansas, Louisiana, and Washington have the greediest politicians, at least measured by sales tax rates.

But this is the point where it makes sense to merge today’s map with yesterday’s map. Because Tennessee and Washington don’t impose income taxes, while Louisiana and Arkansas both make that mistake.

So one of the lessons to be learned is that it’s never a good idea to give politicians multiple sources of revenue (something to remember every time greedy officials in D.C. broach the idea of a value-added tax).

But let’s keep our focus on the main topic, which is identifying the state with the greediest politicians?

If we continue with the methodology of combining the numbers from both maps, California easily ranks as the worst state, with a combined rate of 21.98 percent.

Indeed, it has a huge lead compared to the next-worst states (New York, New Jersey, and Minnesota), all of which have combined rates of between 17-18 percent.

Wyoming, South Dakota, and Florida also deserve applause. Those states are ranked #3, #4, and #5 because they have no income taxes and also manage to keep sales taxes at semi-reasonable levels. 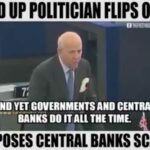 Oldie but Goodie on How Banks are Bust