This week, our hero is Willis Haviland Carrier, the American engineer who created the first modern air conditioning unit.

The invention provides us respite from the summer heat; enabled our species to inhabit previously inhospitable places; increased work productivity when installed in factories and offices around the world; and saved millions of people from suffering heat-related deaths.

Willis Carrier was born on his family farm in Angola, New York on November 26, 1876. Carrier attended Central High School in Buffalo, New York and, in 1897, he won a four-year state scholarship to attend Cornell University. In 1901, Carrier graduated from Cornell with a BSE (Bachelor of Science in Engineering) in electrical engineering. In the same year, he began working as a research engineer for Buffalo Forge Company, a business based in New York that designed and manufactured steam engines and pumps.

Carrier spent the first few months of his new job working on a heating system to dry lumber and coffee. In 1902, Sackett-Wilhelms Lithographing & Publishing Company asked Buffalo Forge to devise a system to control humidity in the former’s factory. The high temperatures and humidity levels in the Sackett-Wilhelms printing factory meant that the printing paper would often soak up moisture from the air, which in turn caused the paper to expand.  That was a problem, because the colors used in the printing process became misaligned when the paper changed its size, thus ruining the production process.   Carrier decided to tackle this problem. By doing so, he ended up creating the world’s first air conditioning unit in 1902.

Carrier’s invention controlled the temperature, humidity and air circulation, while also cleaning the air at the Sackett-Wilhelms printing factory. It worked by drawing in air through a filter, passing the air over coils filled with coolant, and then venting the newly cooled and dehumidified air back out. That year, the New York Stock Exchange became the first building to be air-conditioned.

On January 2, 1906, Carrier was issued with a patent for an “Apparatus for Treating Air.” In 1915, after the Buffalo Forge Company decided to focus solely on manufacturing rather than design of new products, Carrier and six other engineers pooled their life savings of $32,600 (or $826,800 in today’s money) to create the Carrier Engineering Corporation.

With his new company, Carrier began to expand the use of air conditioning units by supplying hotels, department stores, movie theaters and private homes. His units were even installed in the White House, the U.S. Congress and Madison Square Garden.  After experiencing financial problems as a result of the outbreak of the Great Depression, Carrier’s corporation merged with Brunswick-Kroeschell Company and York Heating & Ventilating Corporation to form the Carrier Corporation, with Carrier as Chairman of the Board. Carrier spent the rest of his life improving the design and functionality of his air conditioning units. He died on October 7, 1950 in New York City.

Carrier passed away before he was able to witness the immense surge in popularity of air conditioning during the post-war economic boom of the 1950’s, which saw air conditioning quickly spread across the United States and to other parts of the world.

In 1942, Carrier was awarded an honorary Doctor of Letters degree by Alfred University. In the same year, he was given the Frank P. Brown Medal – an award for excellence in engineering and science. In 1985, Carrier was posthumously inducted into the National Inventors Hall of Fame. Since its creation, air conditioning has saved and improved millions of lives.

This is a guest post from Human Progress by Alexander C. R. Hammond is a researcher at a Washington D.C. think tank. 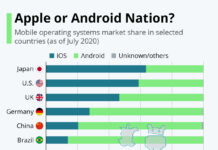 Apple and Google Control 99+% of the US Smart Phone Market