As we watch the legal battles play out – and the spineless GOP watch as President Trump’s votes are stolen – we should remember that these things happened, our votes were stolen and the system is corrupt. Meanwhile in Georgia, the machines are being prepared for the run-off Senatorial elections. Let’s hope Mitch McConnell pays attention – as his ass is on the line, we assume he will be.

Governor Doug Ducey ignored overwhelmingly evidence of voter fraud, corruption and criminality by certifying Arizona’s election. It is almost certainly malfeasance and his questionable conduct should be investigated. Cybersecurity expert and retired army colonel Phil Waldron testified in front of members of the Arizona State legislature on Monday. Colonel Waldron presented an analysis of data that shows a vote spike on Election Day shortly after counting started. Experts including Dr. Shiva believe voter fraud has been going on for much longer than the 2020 election in Arizona.

We have so much evidence of systemic voter fraud in Nevada we couldn’t even fit in the car with us, we needed a separate car for it at the airport. @realDonaldTrump won Nevada, by a lot, and we intend to show that today in court. #Election2020 pic.twitter.com/hYj9EzYxmq

“My name is Gregory Strenstrom, I am from Delaware county, former Commanding Officer in the Navy, veteran of foreign wars, CEO of my own private company, a data scientist & forensic computer scientist & an expert in security & fraud.” pic.twitter.com/LWz9PWZBb5

Georgia – This mom and daughter team were observed a number of times.

Here Ruby shows us the ballots. Her daughter Shae/Shay is in both the video with the “suitcases” (ballot containers) and the thumb drive pick up.

I’m gonna let ya’ all see this,, shhhhh. Don’t tell anybody… even though I’m posting it on Facebook!! ? Ruby Freeman.. @SidneyPowell1 @realDonaldTrump @RebelNewsOnline Her daughter Shay is the suitcase smuggler. She was the Supervisor of registration….? pic.twitter.com/0M2yTHgi1B

Here they are together….watch the USB drive handoff from #RubyFreeman to her daughter Shae. Shae then stuffs it in the sweater pocket of the man “stretching” as she stands up. 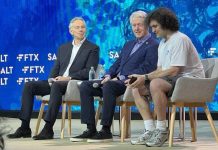