Home Legal A MOTION TO DISMISS FOR LACK OF JURISDICTION SHOULD SWIFTLY END THE...

Originally published in the Daily Caller, by Bob Barr, with permission.

If there was perhaps one mistake our Founders made in drafting the Constitution, it was presuming that future members of the Legislative Branch would be sufficiently competent to actually read the document to which they all had sworn an oath. It is, however, increasingly clear that many – perhaps most — sitting United States senators cannot read the plain text of the Constitution.

The relevant wording in the Constitution is at the very end of Article II, establishing that a constitutionally errant “President,  .  .  .  shall be removed from Office” if he first has been impeached by the House and convicted by the Senate for “high Crimes and Misdemeanors.” Unlike other sections of the Constitution where clarity may be obscured by arcane wording, this particular provision is clear and concise, and it applies to “the President.” The language pointedly does not provide in any way, shape, or form that a “Former President” or an “Ex-President” may be similarly punished, only the President.

The 100-member Senate at this moment is split right down the middle between those who identify as Republicans and those who identify as Democrats.  Democrat leader Chuck Schumer has declared openly and without hesitancy that as the self-styled “Majority Leader,” he will move forward within days to try Donald Trump. The goal of such a trial would be to find Mr. Trump guilty of the single Article of Impeachment passed on Jan. 13 by a majority of representatives on the other side of the Capitol Dome.

While many GOP senators remain openly opposed to Schumer’s plan, it appears that a number of Republican senators, notably including the most recent “Majority Leader” – Kentucky Sen. Mitch McConnell – have signed on to the notion that there will be a trial as demanded by Schumer.

The basis on which Schumer and his Democrat colleagues are proceeding against Trump can best be understood by their all-consuming hatred for the former president, a sentiment they share with their House colleagues. Their zeal to punish Mr. Trump appears to have blinded them even to common sense and to the plain meaning of words – factors that otherwise and in less toxic times would lead them to realize that no matter how powerful and exalted they might view themselves as “senators,” a person cannot be “removed” by them from an office that he or she does not in fact occupy.

No matter the degree to which Sen. Schumer despises Mr. Trump and hopes to prevent him from being able to run again for office at some future date (as unlikely as that may be), the body of which Schumer is a long-serving member does not have power under the Constitution to thus punish the ex-president.

It is less clear what accounts for Sen. McConnell’s decision to buy into the legally baseless presumption that the Senate magically has acquired jurisdiction to conduct a trial of and to then punish a former president. Perhaps it is the fact that Trump’s behavior leading to the twin loss of Georgia’s Senate seats in the Jan. 5 runoff cost McConnell his job as Majority Leader. Maybe it is four years of pent-up dislike for Trump’s personal behavior contrary to establishment norms. Regardless of why McConnell is behaving so foolishly as to read into the Constitution’s impeachment trial power of the Senate something that clearly and legally is not there, it is making the Senate appear unmoored from history, the law, and common sense.

Mitch McConnell is a lawyer. He seems, however, to have forgotten that a prosecutor who oversteps his authority and tries to convict someone over whom the court has no jurisdiction, will be hit with a swift – and ultimately successful – motion to dismiss for lack of jurisdiction. This is precisely what Trump’s lawyers need to file, and by so doing let the American people know that at least they can read the Constitution.

Bob Barr represented Georgia’s 7th District in the U.S. House of Representatives from 1995 to 2003. He served as the United States Attorney in Atlanta from 1986 to 1990 and was an official with the CIA in the 1970s. He now practices law in Atlanta, Georgia and serves as head of Liberty Guard. 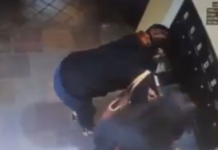 Wanna see a felony in progress?