So, the Russians are wagging their tail feathers at Biden. Just as the US decides to deploy four non-nuclear bombers to Norway for the first time, the Russians put a couple of two nuclear-capable Tu-160 Blackjack bombers in the air above the Barents, Greenland, and Norwegian Seas. Blackjacks have nuclear capabilities and are very fast, and these birds were in the air for over 12 hours. Quite the display, Vlad!

The strategic bombers flew out to the Barents Sea from the Kola Peninsula before the route continued further north and west outside Norway. Then, according to the Twitter user “Hunters Note”, who tracks military aviation signals, the aircraft flew west in the Greenland Sea near Jan Mayen before heading north of Svalbard, across Franz Josef Land towards Novaya Zemlya where another pair of MiG-31 from Rogachevo Air Base escorted the strategic bombers over the Kara Sea en route south.

Was this the reason? Do the bombers in the region make them nervous or was this just Putin showing Bide who’s boss. The Blackjacks apparently came from RuAF Engels Airforce Base in southwestern Russia.

The flight coincides with US preparting to deploy four (non-nuclear!) B-1 bombers to Norway for the first time. https://t.co/ss9SohrJmo pic.twitter.com/pZxukOdvFf

According to American Defense News, the Russians planes were tracked by NATO and intercepted by two Norwegian F-16 fighters on Quick Reaction Alert (QRA) based at Bodø Air Base. Their bomber mission occurred on the same day as the major Norwegian defense exercise Arctic Hawk 21, which involved all of the country’s military branches: Navy, Army, Home Guard, Air Force and Cyber Defense. 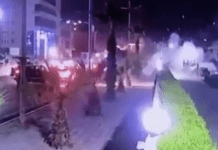 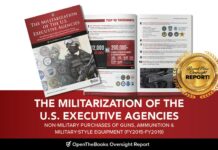 TOP 10 TAKEAWAYS From The Militarization of the U.S. Executive Agencies | OpenTheBooks Oversight Report