Berdan and Boxer primers are two different types of centerfire primers used in modern metallic cartridge ammunition. The main difference between the two is that Boxer primershave a self-contained anvil within the primer whereas Berdan primers have an anvil that is integral to the primer pocket on the cartridge case.

To understand the difference between Boxer and Berdan primed ammo, we first need to understand the sequence of events that happens when you pull the trigger on your favorite centerfire rifle or pistol.

When the trigger is pulled, the firing pin impacts the center of the primer cup. This impact causes the primer cup to compress and push the priming compound into the anvil (more on this later). The resulting pressure causes the priming compound to ignite, resulting in a small explosion. The flame from the explosion travels through the flash hole, igniting the propellant inside the cartridge case, which pushes the bullet out of the barrel.

All centerfire cartridges work under the same principle; however, the difference between Berdan and Boxer primers is the location of the anvil and the flash hole(s). 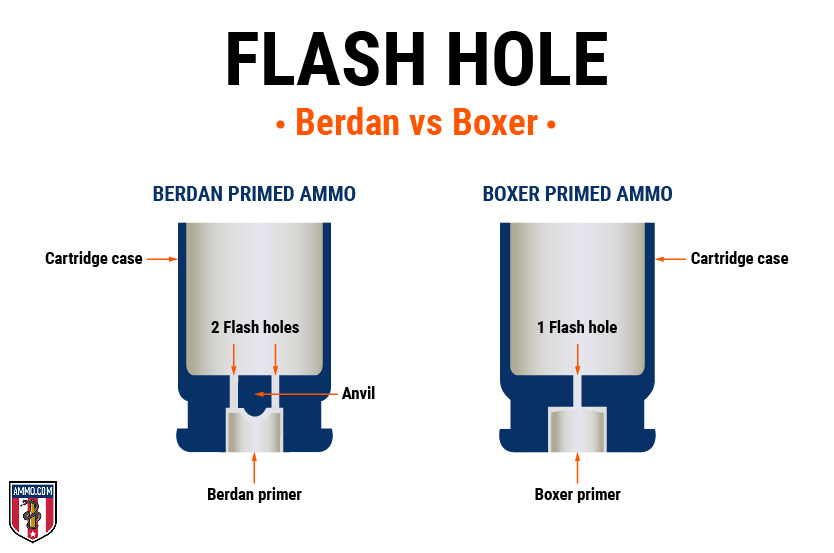 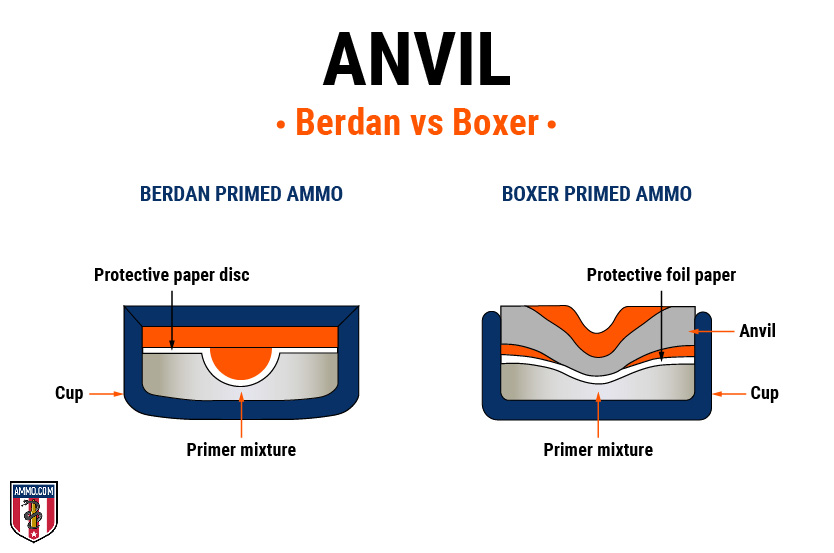 The anvil is another defining difference. For Boxer primers, the anvil is integral to the primer itself. It is installed at the factory on the face of the primer that faces the flash hole.

Boxer vs Berdan: Which Is Better?

Now that you have a better understanding of how Boxer primed ammo and Berdan primed ammo function, we can look at which type of primer will be best for you.

For the average shooter who does not handload their ammunition, the difference between both primer types is nearly undetectable. However, once you start to reload you will quickly understand the differences between the two.

Boxer primed brass is the most common cartridge case found in the United States, which is somewhat comical because it was developed in England. Its biggest benefit is that it is easily reloadable.

Since this primer uses an integral anvil and a single flash hole, it is very simple to remove the spent primer from the primer pocket. This process in reloading is referred to as de-priming or decapping. When a case is de-primed, a handloader will use a specially designed die that contains a decapping pin. The decapping pin fits through the single flash hole and pushes the primer out.

After decapping, a new primer can be easily inserted. A new powder charge can then be added and a new bullet inserted, making handloading extremely simple for Boxer primed cases. Reloading dies, presses, and other equipments are readily available and components are relatively easy to find.

All the major ammo manufacturers in the United States use Boxer primers, including Hornady,Remington, Winchester, Speer, Federal, and others.

The other major benefit of Boxer primers is that there are only four different categories of primers types:

One of the only downfalls of boxer primed ammunition is the inherent complexity of its integral anvil, which can potentially cause problems if an anvil is produced or installed incorrectly. That being said, this is rare. With my many years of reloading experience, I have only seen 2 or 3 that have had an improperly installed anvil (out of 10’s of thousands of primers I’ve reloaded). 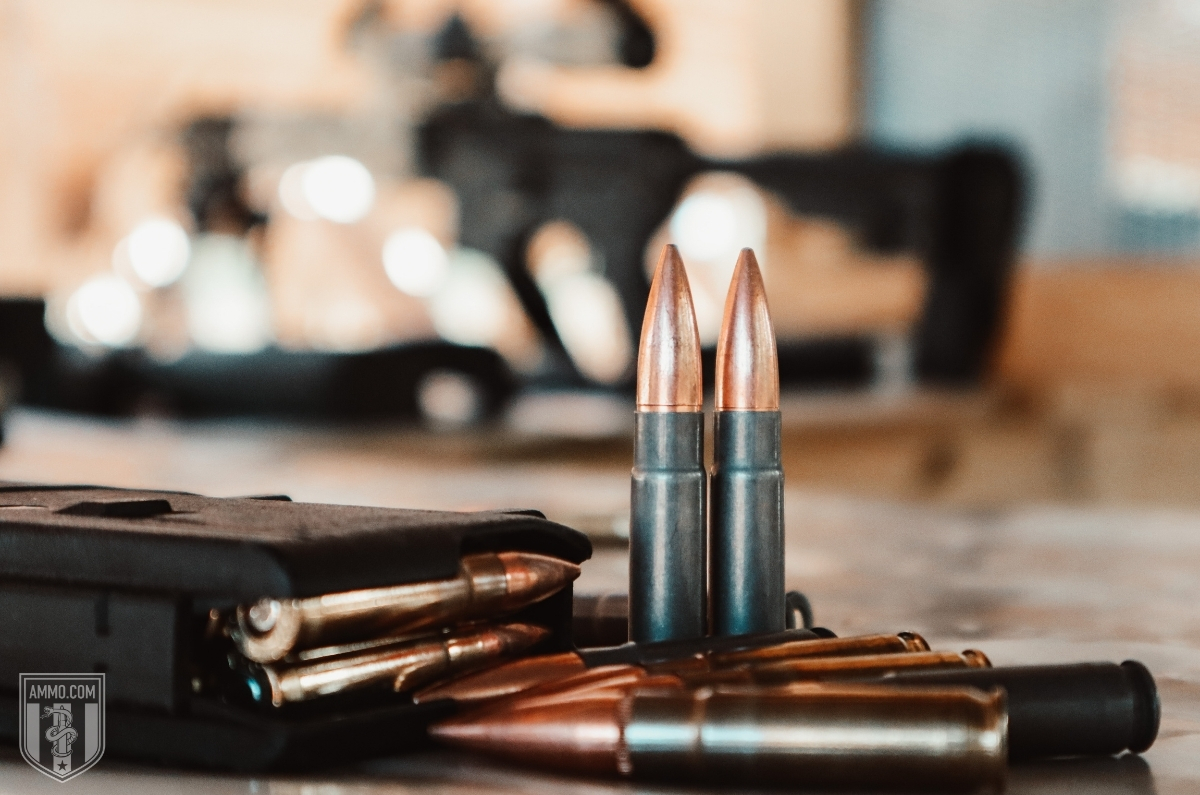 Berdan primers are extremely popular among European ammo brands. Almost all Russian ammunition manufacturers, like Wolf and Tula, are Berdan primed. These manufacturers strive to keep their costs down and there is a slight price advantage to using Berdan primed factory ammo.

European military surplus Berdan primed ammunition can be very cost-effective and will allow you to shoot your favorite centerfire cartridges at a reduced cost.

For firearms using a free-floating firing pin, like the AR-15 or M1 Garand, Berdan primers can add an extra layer of protection against slamfires. This is because Berdan primers are designed to be seated slightly below flush with the base of the cartridge.

A slamfire is when a round is fired prematurely when the bolt of the firearm is out of battery. This can occur when the bolt slams home and the first round in the magazine has a primer that is not seated deep enough into the primer pocket (though this is an extremely rare occurrence).

Berdan primers are seated below flush, which adds an extra layer of protection against a potential slamfire.

Berdan primers cannot be easily removed from a cartridge case due to the flash holes not being centrally located in the primer pocket. Therefore, a special de-priming tool must be used to decap these cartridge cases.

This adds another level of complexity and greatly slows down the reloading process.

Lastly, as the anvil is integral to the cartridge case, there is the potential for the anvil to become damaged after repeat firings. General wear and tear from multiple primer ignitions can cause misfires and cases to be discarded after a few firings.

For the average shooter who has no aspirations of becoming a handloader, there is essentially no difference between Berdan and Boxer primers when it comes to reliability and downrange performance – both primer types will serve you faithfully in the field.

The major difference between the two is the ease of handloading that Boxer primers offer. If you want to get into reloading, then Boxer primers are the superior choice by a country mile.

No matter if you enjoy weighing out your powder charge and crafting the perfect load for your centerfire firearm or if you just want to get out to the range and do some plinking, you can rest assured that Boxer and Berdan primers will get the job done.

Licensed under a Creative Commons Attribution 4.0 International License. Original here. Remember buy your ammo at ammo.com. We love them.