Home Government National Security Is this real life or an episode of Veep?

Vice President Kamala Harris used the pulpit of a defense conference where world leaders gathered to warn Russia that it will face dire economic consequences and an increased presence of Western forces if it attacks Ukraine.

Fewer than 100 attendees filled the auditorium’s seats to hear the vice president’s remarks, with more in the balconies. Sitting in the first row were NATO Secretary-General Jens Stoltenberg and Secretary of State Antony Blinken, and behind them, members of the U.S. delegation, including House Speaker Nancy Pelosi, Democratic Sen. Amy Klobuchar of Minnesota, and Republican Sen. Joni Ernst of Iowa.

Harris said the economic costs to Moscow would be “significant and unprecedented” were it to attack Ukraine, with allies leveling a slate of penalties “that will be swift, severe, and united.” Washington Examiner

It's not an exaggeration to say that those exact words could've been lifted from an episode of VEEP. https://t.co/e5MDxttxK3 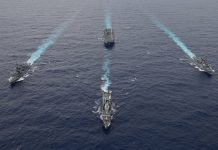