The news release was the latest example of this administration’s pattern of deliberately mischaracterizing federal laws regarding the liability of firearms retailers and manufacturers for subsequent criminal use of products they sell or manufacture. In other words, a lie designed to further its gun-control agenda.

The federal law at issue is the “Protection of Lawful Commerce in Arms Act” or “PLCAA,” legislation passed by the Congress and signed by President George W. Bush in 2005.

PLCAA was deemed necessary by a majority of both houses of the Congress and the president of the United States, in the wake of a series of civil lawsuits against lawful manufacturers and retailers of firearms for the subsequent use of those products by individuals for criminal purposes.

The law does not and was never intended to provide absolute protection for manufacturers or retailers of firearms. Rather, the PLCAA was designed simply to provide a legal framework according to which neither manufacturers nor retailers of lawful firearms would be treated differently from other lawful businesses, such as automobile manufacturers and dealers that never had been held liable for the subsequent use of their products (cars) by negligent or unlawful drivers.

In fact, the clear language of the PLCAA provides that so long as the firearms businesses follow the many laws governing their operations, and so long as neither the manufacturer nor the retailer knew or had reason to believe its product would be used by criminals or in an unlawful way, neither business could be sued if an individual later used the gun in such manner.

If, however, there was or is evidence to the contrary — that is that either the manufacturer or the retailer knew or had reason to believe the subsequent owner or user of the firearm would use it in an unlawful manner — they can in fact be sued civilly for damages, just like any other business.

Notwithstanding this clear language and publicly available reporting on the PLCAA at the time of its passage, the Biden administration continues to deliberately mischaracterize the statute.

For example, in last week’s news release, which noted that “President Biden has repeatedly called on Congress to repeal the Protection of Lawful Commerce in Arms Act,” the White House claimed that the law provides “more protection from liability” than is afforded other products, and that it completely “denies” victims of “gun violence” any civil remedy in the courts — statements that are categorically untrue.

In fact, the same as before the PLCAA was enacted, a victim of gun violence has full opportunity to sue the individual who used the firearm unlawfully, as well as any other individual or business that transferred or manufactured the gun that was used to commit a criminal offense, if that business did not itself abide by the law or sold or transferred the firearm negligently or with reason to believe it would be used unlawfully.

Continuing to assert that the PLCAA provides absolute immunity from lawsuits against a firearms manufacturer or retailer is utterly disingenuous. Still, this administration and as its gun-control cohorts in the Congress, along with its enablers in the media, continue perpetrating such a deliberate lie to the American people for the sole purpose of furthering the left’s long-held goal of limiting to the greatest extent possible the manufacture, retail and individual possession of lawful firearms.

However, for an administration claiming that our country’s southern border is secure and that an economy experiencing a record level of inflation is in good shape, lying about the scope of a federal law is considered but a minor fib.

Bob Barr represented Georgia’s Seventh District in the U.S. House of Representatives from 1995 to 2003. He served as the United States Attorney in Atlanta from 1986 to 1990 and was an official with the CIA in the 1970s. He now practices law in Atlanta, Georgia and serves as head of Liberty Guard. Reproduced with permission. Original here. 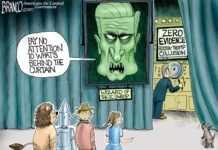