Home Technology Is Melamine going to save the Eco-nuts Day?

Like knights in search of dragons or princesses in search of unicorns, the indoctrinated eco-left is constantly in search of ways to reduce levels of CO2, the life-giving plant food that makes up a minuscule 0.04% of our atmosphere.

There is no human activity they won’t rush to curtail in the name of “reducing carbon emissions” – which is bonkers asa we are a carbon-based species just like most of the other living organisms on the planet.

However, today we bring something to cause them joy. Who doesn’t love melamine?

That stuff that makes up classic 1980s laminated countertops? It could be the key to cheaply and effectively capturing carbon dioxide. Chemists @Stanford, @UCBerkeley & @TAMU have found a way to use melamine (which is used in Formica) for capturing CO2: https://t.co/e8Yh46bGm1 pic.twitter.com/bFqDApSVDj

The new material is said to be simple to make, requiring primarily off-the-shelf melamine powder — which currently costs about $40 per ton — along with formaldehyde and cyanuric acid. The process for synthesising the melamine material is described in Science Advances.

“We wanted to think about a carbon capture material that was derived from sources that were really cheap and easy to get. And so, we decided to start with melamine,” said Jeffrey Reimer, Professor of the Graduate School in the Department of Chemical and Biomolecular Engineering at the University of California, Berkeley, and one of the corresponding authors of the paper.

UC Berkeley chemists created the first such carbon-capture MOF in 2015, and subsequent versions have proved more efficient at removing carbon dioxide from flue gases, such as those from a coal-fired power plant.

Haiyan Mao, a UC Berkeley postdoctoral fellow and first author of the paper, said that melamine-based materials use much cheaper ingredients, are easier to make and are more energy efficient than most MOFs.

“In this study, we focused on cheaper material design for capture and storage and elucidating the interaction mechanism between CO2 and the material,” Mao said in a statement. “This work creates a general industrialisation method towards sustainable CO2 capture using porous networks. We hope we can design a future attachment for capturing car exhaust gas, or maybe an attachment to a building or even a coating on the surface of furniture.” 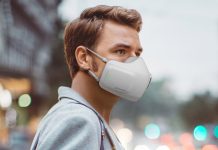 What do these hi-tech masks REALLY do?