He then earned almost $1 million/yr as a lobbyist for Big Dairy after Obama left.

The Upper Leacock Amish farmer and proprietor of Miller’s Organic Farm thinks about the field of hay he must bale before an impending thunderstorm arrives. He studies his herd of 45 dairy cows staying cool underneath a grove of trees.

Miller contemplates ongoing food shortages that have hit grocery stores for months around the country.

He also has the looming threat of a possible jail sentence and more than $300,000 in fines in relation to his years-long court battle with the federal government over food safety laws and inspections of his operations.

Miller said federal officials were last on the farm about two months ago, while the government is “holding hostage” his case that’s currently in the U.S. District Court for the Eastern District of Pennsylvania and another case making its way through the U.S. Third Circuit Court of Appeals. More here. 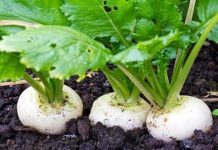 VIDEO: 4 of the Best Root Vegetables You Can Grow at Home Victory Gardens: returning to a western nation near you soon.