“China is in war footing against the United States and has been for years. Now they are pushing Taiwan to the brink with provocative action after provocative action.  And somehow, the Pentagon allowed the manufacturer of America’s most advanced fighting aircraft to release that they have stopped production of the plane because a magnet used by the plane is made out of metal sourced to China.

“The law which outlaws using Chinese components into our military vehicles is necessary and wise.  We cannot have China crashing our aircraft with a simple instruction. But at a time when China’s ambitions are being fed by our national leader’s weakness, it is absurd to slow or stop production of our most feared aircraft due to reliance on a Chinese alloy in a magnet. And it is darn near suicidal to tell the world.

“The even bigger picture is the dangers of relying upon the Chinese for any products.  Currently, China controls nearly 80 percent of all rare earth metals in the world, yet the Biden administration continues to shut down or not allow development of our own domestic sources of these needed industrial building blocks.  Right now, the Biden administration is seeking to move ahead with regulatory actions to stop the production of Rhodium at the proposed Pebble Mine in Alaska. Rhodium is an essential rare earth metal for aircraft engine production. Yet, EPA regulators continue to stop the development of the mine.

“Joe Biden needs to wake up to the national security dangers of his policies, before his green agenda becomes fatal for freedom across the globe.” 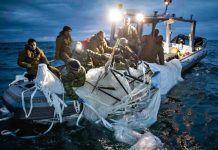 The Navy’s been busy! 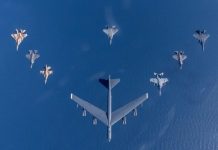