Florida has become a “refuge of sanity in a world gone mad.”

That was the assessment of Gov. Ron DeSantis, R-Fla., in remarks Saturday evening at the third National Conservatism Conference in Miami.

DeSantis’ speech focused on the core theme of how Florida has become a bastion of liberty—a refuge for those seeking better governance and a freer life. He said that his state, in many ways, has gone in the opposite direction compared with many other states and the federal government.

“It is said that our federalist system creates ‘laboratories of democracy’ where different states can approach things in different ways,” DeSantis said. “But I don’t think we’ve ever seen such sharp contrast between different governing philosophies as we have in the last few years.”

He said that what we have seen is that there’s been a “great exodus” from states and localities governed by “leftist” politicians.

Refugees from those places have fled to Florida, which DeSantis said has become a “promised land” for record numbers of people.

The Florida governor laid out several statistics about how Americans—since the beginning of the COVID-19 pandemic—have flocked to Florida, not only to visit, but to live.

Since the beginning of the pandemic, he said, “there’s been more adjusted income moved into the state of Florida than has ever moved into any one state in a similar time period” in American history. DeSantis pointed to the contrast with states “hemorrhaging” wealth and people, such as California, Illinois, New York, and New Jersey.

That hasn’t meant that the Sunshine State has become bluer politically as people arrived there from other places. Instead, DeSantis said, it created a political sea change, where Republican voting registration is now higher than Democratic registration.

That occurred, he said, because Florida followed a specific “blueprint.”

Instead of following the path set by “media elites,” DeSantis said Florida became grounded in “core principles” derived from the philosophy of the nation’s Founders.

“We are not afraid to buck the discredited ruling class and elites,” he said, citing President Dwight Eisenhower in his farewell address in January 1961.

In that speech, Eisenhower warned that “public policy could itself become the captive of a scientific-technological elite,” and he called on “statesmen” instead to guide our system “aiming toward the supreme goals of our free society.”

“My view was that we needed to choose freedom over Fauci-ism in the state of Florida,” DeSantis said, in reference to federal public health official Anthony Fauci. “We had to make sure these policies weren’t excluding important values just because you had people with a very narrow-minded view, with some credentials behind their name … telling us that those values didn’t matter.”

Taking that path is what allowed Florida to thrive while other states suffered during the COVID-19 pandemic, DeSantis noted, and was the reason, for instance, why 2021 was a record year for tourism in the state.

And it wasn’t just tourism that benefited. Schools remained open. That, he said, prevented the drop in student test scores that took place in states with heavy-handed restrictions and school closings.

In addition to keeping Florida generally open, DeSantis said, he thought it was important to protect an individual’s right “to participate in society.” In particular, he referred to so-called vaccine passports used by some businesses to bar entrance to people who didn’t have proof of vaccination.

DeSantis prohibited the use of vaccine passports and employer-mandated vaccines, which he said led to Florida having a reputation as an open and free state.

He acknowledged that some conservatives criticized his policies as intrusive for businesses, but persisted in the face of the criticism.

“Because we didn’t have vaccine passports, 2021 marked the best year for domestic tourism in the state of Florida,” DeSantis said. “… We were right on that, both from a freedom perspective and from an overall social-good perspective.”

In addition to his COVID-19 policies, DeSantis cited other areas that he said have moved the state in a positive direction. That includes an efficient system that has produced government services better than those of other states with vastly larger budgets. He pointed to New York state, which has 3 million fewer people than Florida, but a state budget that is “twice the size.”

Despite that, Florida has provided better roads, schools, and other services while at the same time having no income tax and the “second-lowest per capita tax burden” in the country, DeSantis said.

The Florida governor also pointed to his state’s robust set of school choice programs that have provided opportunities for millions of children. But it wasn’t just school choice DeSantis offered; he said he also pushed for laws to prevent critical race theory and other fringe ideologies from taking over classrooms.

He said that by making Florida a “a law and order state,” and punishing those who rioted and destroyed property, he prevented the chaos, destruction, and social decay seen in other states amid and after the 2020 riots.

Finally, DeSantis spoke about the challenges we as Americans face in our time that are unique, even in comparison to what President Ronald Reagan tackled in the 1980s. No longer is the threat to freedom coming just from the size of government, he said. It’s coming from the power of unleashed bureaucracies and radicalized institutions, public and private.

He said too many institutions have been swallowed up and transformed by an aggressively left-wing and ideologically uniform ruling class.

It isn’t going to be an easy fight, he said, “because they have so much support across the commanding heights of society.” Yet the challenge isn’t simply about having common sense or the right policies, it’s about having courage and standing for what’s right.

“If you stand up for what is right, you are going to get attacked by corporate press. You may get censored by Big Tech. You’ll get smeared by the opposition,” he said.

Ultimately, however, DeSantis concluded,  it’s better to do the right thing and “let the chips fall where they may.”

Jarrett Stepman is a columnist for The Daily Signal. He is also the author of the book “The War on History: The Conspiracy to Rewrite America’s Past.” Original here. 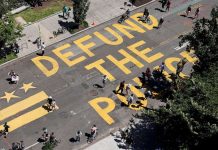 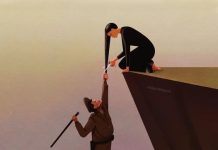 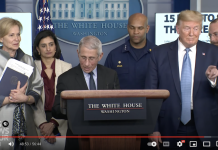