Florida recently held its annual Florida Python Challenge, which helps remove invasive Burmese pythons from south Florida. Since 2000, more than 17,000 wild Burmese pythons have been removed from the state of Florida.

One of them, however, took one for the team before being caught and dispatched another Florida monster loose in the Everglades.

This clip was shared by geoscientist Rosie Moore on Instagram where it has racked up over 300,000 reactions. She told FOX 35 that the video was taken several months ago but that she just recently posted it online. Watch as a five-foot alligator is slid out of the belly of the snake after it had been euthanized and turned over to the research lab for necropsy and scientific sample collection.

“This particular python was roughly 18-foot and had consumed a 5-foot alligator,” Moore wrote on Instagram.

The footage shows several scientists evaluating a large bulge in the python’s stomach before opening it up and getting a better picture of what was inside. The entire alligator is then removed from the python. 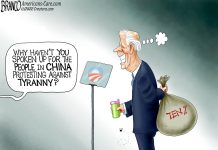