How to Buy Wood 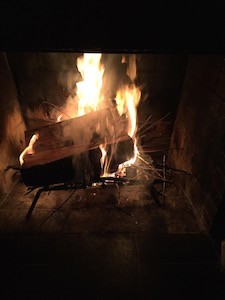 It is better to buy wood by volume than by weight because between 35% and 60% of the weight of freshly felled wood comes from water. Poplar is one of the wettest woods when freshly fuelled and ash (at 35%) one of driest. Trying to burn wet wood will produce steam, less heat (as so much of it is being used to dry the wood) problems with the chimney (see below) and pollution.

Seasoning reduces the moisture content of the wood. Wood felled during one winter should be seasoned until the next and preferably a second winter before it is burned. Trees felled during the Spring/Summer will have a very high moisture content compared to those felled in late Autumn/Winter, therefore whilst a log first cut in January may be ready to burn within say, a year, it is necessary for a log cut in May to be seasoned for at least two years.

While seasoning it should preferably be stored under cover in an airy place such as an open sided lean-to. Wood should be burned when the moisture content is below 25% – ‘air-dry’. You can tell if a log is dry because the bark will come away easily in the hand and the log will have splits across the grain. Ideally, logs purchased should be no more than 10cm thick. Any that are will need to be split again to ensure that they burn properly.

In terms of what type of wood to burn it is worth bearing in mind the heavier and therefore denser the wood, the higher its calorific value and therefore the longer it will burn. Hardwoods tend to be denser than softwoods such as pine and spruce and some of the densest are oak and beech. However, some of the very dense hardwoods like oak and elm can be very difficult to burn, so it is usually best to burn them with another type of wood as well.

Softwoods tend to be easy to light and to burn quickly (making them very good kindling). Some species like spruce and horse chestnut spit badly making them a hazard in an open fire.

Some of the best woods to burn are ash, beech, hornbeam, hawthorn, crab apple and wild cherry.

Wood is a very versatile fuel and can be burned in many different forms and in a number of different appliances. It can be burned to heat one or more rooms, the whole house, to produce hot water and to cook on or a combination of all or some of these.

To produce heat for one or more rooms logs can be burned on an open fire. These look nice, but tend to have low efficiencies – about 80-85% of the heat goes up the chimney. A more efficient alternative is a wood burning stove, which have efficiencies in excess of 70%.With the right wood burning stoves wood can be burned in a smokeless  zone. Some stoves can also be fitted with back boilers to heat one or more radiators or domestic hot water.

Logs can also be burned in a ceramic stove. These have extensive internal flues and can retain heat for up to 24 hours after the last firing. They can be around 90% efficient and some can be used in smokeless zones.

Another option is a range. Ranges can be used for cooking, hot water and central heating.

There are also many domestic scale log and wood-chip burning central heating boilers available. Using wood to heat commercial and public buildings is common in countries such as Austria and Sweden. Pellet stoves and boilers, using pellets made from waste wood are another possibility. They can be purchased new or the necessary adaptation equipment retrofitted to an existing coal or oil boiler. If a central heating                system is currently running on oil or LPG or if rooms are currently heated with electricity, then using wood to run the central heating system is often a cheaper option although the initial cost of the boiler will be more than a conventional one.

How to Burn Wood

Like other fuels, wood needs plenty of air to burn well. It is best to allow a fresh change of logs to burn freely until they almost turn to charcoal and only then to ‘damp’ down the fire by reducing the air supply. Filling a stove with logs and damping it down straight away, stops the ‘volatiles’ from burning and generates a lot of smoke and tar that is bad for health and the environment.

More Climate Nonsense – “You pay the cost, not us. It won’t affect us.”