Home Health Heartburn: What to take, what to avoid, when to give in. 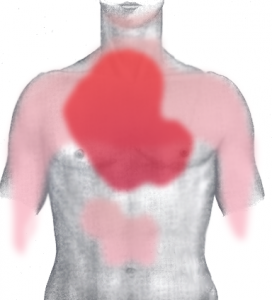 Although the name may imply the heart, heartburn has absolutely nothing to do with the heart itself. Heartburn is pain felt in the chest by a burning sensation in the esophagus, which is located close to where the heart is.

Most of the time it comes from the esophagus. The pain often rises in your chest from your stomach and may spread to your neck or throat.

Sleep doctors are aware that sleep apnea causes heartburn a well as persistent urge to urinate. Both symptoms are a result of the diaphragm expanding to its extreme in an attempt to fill the lungs and pushing down on the stomach and bladder.  (CPAP machines can often put an end to nighttime heartburn.)

Almost everyone has heartburn sometimes. If you have heartburn very often, you may have gastroesophageal reflux disease (GERD).

Normally when food or liquid enters your stomach, a band of muscle at the end of your esophagus closes off the esophagus. This band is called the lower esophageal sphincter (LES). If this band does not close tightly enough, food or stomach acid can back up (reflux) into the esophagus. The stomach contents can irritate the esophagus and cause heartburn and other symptoms.

So, when food and stomach acid regurgitate back into the esophagus, a burning feeling is felt near the heart. This feeling is known as heartburn.

Antacids may be used to relieve heartburn by making stomach juices less acidic, therefore reducing the burning feeling felt in the esophagus. If heartburn becomes frequent or prolonged, medical intervention may be necessary to correct the problem.

Severe heartburn can be a consequence of diet. With that in mind, here’s a list of what to eat/drink and what not to eat/drink:

Potato juice – put a few potatoes in a blender and then mix the result with another type of juice. Believe it or not, this actually works.

Medicines that can cause heartburn include:

Talk to your doctor if you think one of your medicines may be causing heartburn. Never change or stop taking medicine without talking to your doctor first.

You should treat heartburn because reflux can damage the lining of your esophagus. This can cause serious problems over time. Changing your habits can be helpful in preventing heartburn and other symptoms of GERD.

The following tips will help you avoid heartburn and other GERD symptoms. Talk to your doctor if you’re still bothered by heartburn after trying these steps.

First, try and avoid all the delicious foods and drinks that can trigger reflux, such as:

Next, try changing your eating habits:

Make other lifestyle changes as needed:

If you still do not have full relief, try over-the-counter medications:

Get urgent medical care if:

Call your doctor if: