One day we’ll be able to print anything we want. Look at this house in China. Does it spell the end for traditional building techniques? Tell us in the Comments section below.

It’s “the world’s tallest 3D-printed building.” Next to it is an equally massive 3D-printed mansion, which measures 11,840 square feet. Like the previous buildings, the walls are comprised of a mix of concrete and recycled waste materials, such as glass and steel, and formed layer by printed layer. The company stated that the total cost for the mansion was roughly $161,000.
Or look at this one in Dubai, in the United Arab Emirates. The 2,000-square-feet building will be constructed in the center of Dubai using a 20-foot-tall 3D printer.

The machine will create the parts at the actual site, as opposed to having them printed elsewhere and shipped in. 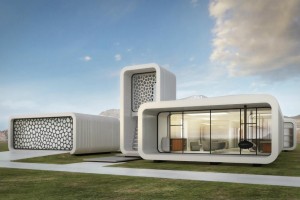 Construction is expected to take just a few weeks. The printing company creates the exterior of the building with a mix of cement and construction waste, layer by layer, “a process much like how a baker might ice a cake,” the company says on its website.

The printed concrete is treated with special hardeners to ensure that each layer is able to support the next one.The parts are then joined together to create the building. Fiber reinforced plastic and glass fiber reinforced gypsum will also be used in the building’s construction. These building are yet another indication of how rapidly additive manufacturing (3-D printing) techniques are advancing.
Once used primarily as a means to quickly make miniature model versions of products, the technology has reached a point where large-scale printers are now capable of making life-sized working creations, such as automobiles, in mere days. For instance, it took less than 48 hours for start-up Local Motors to print a two-seater car called the Strati and drive it off the showroom.
Fancy trying 3-D printing at home? Then there’s a desktop version like this for the home enthusiast. Don’t be put off by the simplicity of the end products you see now, this is ALL abou

t the quality of the design software and that’s developing at a lick. There are design apps for you smartphone being updated around the clock. You can purchase printers like this from Amazon from around$400.