If you live in the Pacific Northwest or have friends or family there, I encourage you to read and share Kathryn Schulz’s chilling New Yorker feature that looks at the inevitable seismic disaster building day by day in the region.  Kenneth Murphy, the director of the division of the Federal Emergency Management Agency that’s responsible for Alaska, Idaho, Oregon and Washington told the New Yorker that the odds of such an earthquake striking the Northwest in the next 50 years are estimated to be, “One in three. Our operating assumption is that everything west of Interstate 5 will be toast.”

Strain is growing along the Cascadia fault beneath the seabed offshore and, as seismologist Chris Goldfinger told Schulz, “The gap between what we know and what we should do about it is getting bigger and bigger.”

The problem lies roughly 80 miles off the coast of Oregon and it’s called the Cascadia subduction zone, where a pair of tectonic plates are now grinding up against one another under the Pacific Ocean, and they’re headed — slowly but inevitably — toward a moment when the pressure now building there will become too great to bear.

When that happens, a huge tranche of the Pacific Northwest will be deluged and destroyed.

What do scientists think will happen?

The Cascadia Subduction Zone (CSZ) earthquake and tsunami is one of the most complex disaster scenarios that emergency management and public safety officials face in the Pacific Northwest.

Scientific evidence indicates that a magnitude 8.0-9.0 earthquake occurs along the 800-mile long CSZ fault on average once every 200 to 500 years. The last major earthquake and tsunami along the fault occurred over 300 years ago in 1700.

Recent subduction zone earthquakes around the world underscore the catastrophic impacts we will face when the next CSZ earthquake and tsunami occurs in our region:

In a Reddit “Ask Me Anything” session John Vidale, director of the Pacific Northwest Seismic Network,  cautioned readers not to panic about the story and its implications. “Overall, it was a well-written and documented article,” he said. He played down the effects but admitted there would be many.

“The scenario left an impression of much greater devastation that is anticipated to occur, however. Communications may black out, transportation may grind to a halt, stores conceivably could run out of goods for a while, but that doesn’t constitute “toast” in one’s mind. The speaker must have been referring to some aspect of those problems, not to smoking rubble.”

However, conducting successful life-saving and life-sustaining response operations in the aftermath of a Cascadia Subduction Zone disaster will hinge on the effective coordination and integration of governments at all levels – cities, counties, state agencies, federal officials, the military, tribal nations – as well as non-government organizations and the private sector.

That’s why FEMA is holding Cascade Rising. One of the primary goals of Cascadia Rising is to train and test this whole community approach to complex disaster operations together as a joint team.

The culminating event will be a four-day functional exercise to occur June 7-10, 2016. Emergency Operations and Coordination Centers (EOC/ECCs) at all levels of government and the private sector will activate to coordinate simulated field response operations both within their jurisdictions and also with neighboring communities, state EOCs, FEMA, and major military commands.

The Squirrel says: If you live in the zone and don’t want to leave your safety to FEMA here are a few tips. Have your car permanently ready and parked in 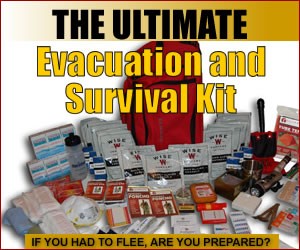 the direction you would travel to go East as fast as possible. Work out an efficient route that takes into consideration the mass rush for the interstates. Watch the birds and animals. They react before the tremors are felt. If it’s suddenly quiet, grab your family, get in your car and go. DO NOT DELAY. So what if you were wrong? It’s a rehearsal for the real thing.

Have an evacuation kit ready in your vehicle and have a plan of action for where you will go. Have cash in your Evac bag as ATM and gas machines are going to fail for lack of power. Have food and clean water. Be prepared to use your vehicle as a home base.