Home Food How to keep the family safe from food-borne illnesses
By Jennifer Sheehan, The Morning Call (Allentown, Pa.)

One in six people in the United States suffers from food poisoning each year, according to the Centers for Disease Control and Prevention.

And young children are especially vulnerable because their immune systems aren’t mature or strong enough to fight off foodborne pathogens such as norovirus or salmonella.

August is “Kids Eat Right Month” and experts are urging adults to lead by example — by practicing food safety and proper hand washing — to help keep themselves and their children healthy.

We talked with Beth Somishka, a sanitarian with the Bethlehem Health Bureau, on how best to keep our food (and kids) safe this summer:

–Wash your hands and teach your children to do the same:

Proper hand-washing can prevent nearly half of the cases of food poisoning, statistics show.

After you use the restroom, you wash your hands. This would seem to be a no-brainer. But it’s more than just that.

“Bacteria is everywhere,” Somishka says. “We carry bacteria on our hair and on our faces, and that goes from our hands to our food. Even the simplest thing such as petting a dog can transfer bacteria.”

“You got to get all the nooks and crannies,” Somishka says. “Everybody should wash for 20 seconds, and with warm water and soap.”

For kids, a good way to ensure they are washing long enough is to encourage them to sing ” Twinkle Twinkle Little Star” or “Happy Birthday” twice — and slowly.

Sanitizers aren’t a quick fix and should not replace hand washing, Somishka says.

“They are good to use after you wash your hands,” Somishka says. “All they really do is push around the soil. It’s better than nothing.”

If you’re on the go, an alternative to sanitizer would be alcohol-based towelettes.

“They are better because they wipe away the soil,” she says.

Raw meats and poultry should be kept separate and cut on separate surfaces.

Most of us know this. But Somishka says people need to remember things like not reusing marinades and keep cooked food away from raw food.

It’s also important to regularly clean surfaces such as high-chairs and kitchen counters. Bleach and water is the best way to keep things sanitized, Somishka says. Use 1 tablespoon of bleach per gallon of water.

–When you cook, use a thermometer

There is also the very unscientific way of judging the doneness of red meat by giving it a poke with your finger and see how firm it is. The safest way to cook meat is to use a thermometer.

Here’s another opportunity to show your kids how to cook meat properly. Show them the thermometer so they can see how it works and talk to them about what’s the safest temperature for that type of meat. Teach your kids what raw chicken looks like and why it’s unsafe to eat.

Many of us are having backyard barbecues this summer. That food, sitting outside, will be OK for about two hours — but then it needs to be refrigerated.

If it’s been sitting out for longer than four hours, it needs to be thrown out, Somishka says.

In a few weeks, kids will be back to school. For those kids who pack a lunch, make sure that lunch box is insulated and has a solidly frozen ice pack to keep food fresh and safe.

And it’s best to err on the side of caution when deciding whether a lunch needs an ice pack or something should be refrigerated.

“When it doubt, you should refrigerate,” Somishka says.

Keep your family safe by using a thermometer.

Eggs: Cook until yolk and white are firm

Fin fish: 145 degrees or until flesh is opaque and separates easily with a fork 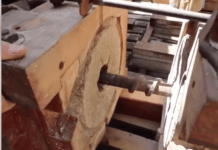 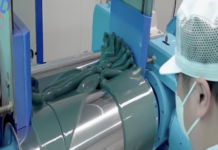 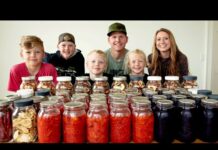