We learn from history, right? But sometimes that’s mythologized, or warped. So here’s  Dan Mitchell‘s analysis.

Among Republicans and conservatives, Ronald Reagan is widely revered as a great President. From their perspective,

he was the candidate who actually made America great again.

Fans of the Gipper tell us the economy rebounded, inflation was tamed, incomes rose, unemployment fell, and the Evil Empire was defeated. What’s not to love?

That’s an impressive list of accomplishments, but is it accurate? Did Reagan and his policies produce good results, or has history created a misleading perspective (just as people for many decades credited Franklin Roosevelt for ending the Great Depression when we now know that FDR’s policies actually lengthened and deepened the downturn)?

Some libertarians are skeptics, arguing that Reagan’s rhetoric about reining in big government was much better than his actual record.

So let’s look at what actually happened in the 1980s.

The place to start, if we want neutral and unbiased data, is Economic Freedom of the World. Annual data for the 1980s isn’t available, but the every-five-year data allows us to see that economic liberty did increase between 1980 and 1990. 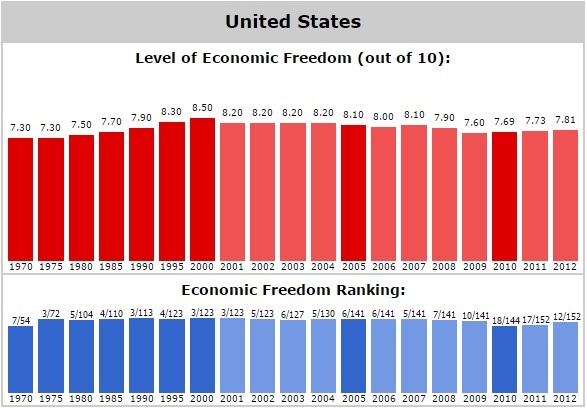 Now let’s look at the specific components to see the potential impact of Reaganomics on important variables such as fiscal policy, rule of law and property rights, trade policy, regulatory policy, and monetary policy.

I’ve created a table from the data on page 188 of the latest Economic Freedom of the World. As you can see, there was a substantial improvement in fiscal policy, a modest improvement in monetary policy, no change in regulation, no change in rule of law and property rights, and a small drop in trade. 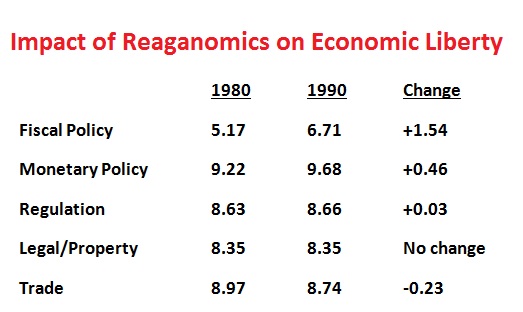 And if you then dig into the EFW excel file and look at the specific variables that are used to create these five scores, you’ll get more details.

On fiscal policy, for instance, there was a modest improvement in the “government consumption” score but a huge jump in the “top marginal tax rate” score. All of which makes sense because the burden of government spending (measured as a share of GDP) fell slightly during the Reagan years while the top tax rate dropped dramatically from 70 percent t0 28 percent.

Monetary policy improved for the obvious reason that the big drop in inflation meant a big increase in the “inflation” score. And the trade score dipped mostly because of an erosion in score for “tariffs.”

Now for my subjective assessment. I think Reagan was even better than shown by the EFW data. Here are three reasons.

Last but not least, let’s look at what Reagan’s policies meant for ordinary people. Did more economic liberty lead to better lives?

The answer is yes. The poisonous hidden tax of inflation largely disappeared. The unemployment rate fell. Labor force participation increased (in marked contrast with Obama). And there was a big increase in income for average Americans (again, in sharp contrast with Obama).

No wonder, when presented with a hypothetical matchup, the American people said they would elect Reagan over Obama in a landslide.

P.S. Critics of Reaganomics, including some on the right, inevitably raise the issue of deficits and debt and assert that Reagan failed. I think red ink is the wrong measure, but even for those who fixate on that variable, it’s worth noting that deficits were relatively small by the time Reagan left office and the Congressional Budget Office predicted they would continue falling if his policies were maintained. Moreover, the 1980-1982 double-dip recession was the reason red ink expanded so much during the early Reagan years, and that was primarily the inevitable consequence of the reckless monetary policy of the 1970s.

P.P.P.S. If you want to be inspired, click here and here to see two short clips of Reagan in action. And at the bottom of this post, there’s a great video of Reagan embracing libertarianism.