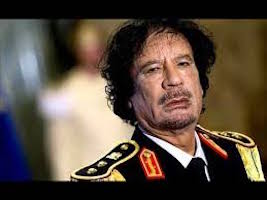 This is the second in ASI’s historical look at how precious metals protect your access to wealth. There is a lesson to be learned, here… even if the main character is despised throughout the world.

During the height of the Libyan rebellion (the so-called ‘Arab Spring’), Dictator Muammar Gaddafi was desperately trying to preserve his power and his life. He couldn’t borrow the money or access funds Libya had moved abroad. His accounts were frozen worldwide. Gaddafi had only one hope of financing his war against the insurgents.

It was enough to finance a war!

So while no legitimate business or government would allow Gaddafi access to money, or even trade with him, his hoard of precious metals allowed him to acquire currency, arms, food, and other supplies for his military. This proves once again, what we have emphasized so many times: There is simply no better “wealth insurance” than the real thing in your personal possession.

If you are fortunate to never have a financial emergency, even better. You can make certain your children or grandchildren have their own ‘insurance policy’ to protect them from the twists and turns of life, by leaving them your core holdings.

Gaddafi’s precious metals did serve him relatively well, allowing him stay in power a while longer and to leave a legacy to his surviving children.

As the ‘War on Cash’ unfolds before our eyes, you can take steps now to protect your hard-earned wealth while maintaining a shred of your privacy.

And, keep an eye out in your emails for future stories of how gold and silver have protected wealth and the lives of their owners throughout the ages.