Home Government Economics Why economic liberty floats all boats and why the opposite is true!

Socialism is a very bad concept. It deserves mockery rather than respect.

But that’s true of all statist ideologies.

Last year, as part of a column on the collapse of the Soviet Empire, I put together a statism spectrum showing the degree to which various nations allow economic liberty.

I thought this effort was useful because it shows, for instance, that the United States, France, and Hong Kong are all on the right side, but that there are nonetheless obvious differences in the amount of economic freedom for those three jurisdictions. Likewise, it’s not good to be Mexico, China, or North Korea, but there are degrees of statism and it’s worse to be farther to the left.

Speaking of left, not all advocates of bigger government are the same. So earlier this year I created another spectrum showing that there are various strains of statism, especially among true believers.

The value of this spectrum is that it shows the differences between totalitarians, genuine socialists, and run-of-the-mill hard-core leftists like Bernie Sanders.

And both of these spectrums were implicit in my interview about Venezuela. I pointed out that Venezuela technically isn’t socialist, but also suggested that doesn’t matter because the country is definitely on the wrong part of the statism spectrum.

And Venezuela definitely is proof that being on the wrong side of the spectrum is a recipe for collapse (or, in the case of North Korea, a recipe for never getting off the ground in the first place).

Since we’re discussing statism, let’s close with some really good news. Matt Yglesias of Vox likes big government. A lot. But he’s also capable of dispassionately analyzing what works and doesn’t work for his side. And   that “socialism” is a bad word for those who want to expand the size and scope of government.

Bernie Sanders refers to his ideology — which I would characterize as social democracy or even just welfare state liberalism — as democratic socialism, a politically loaded term that seems to imply policy commitments Sanders hasn’t made to things like government ownership of major industries. …the socialist branding seems to have offered Sanders some upside…earning him enthusiastic support from a number of politically engaged people who seem to really be socialists… Against this, though, one has to weigh the reality that socialism is really unpopular in the United States.

How unpopular? Yglesias shares some new polling data from Gallup. 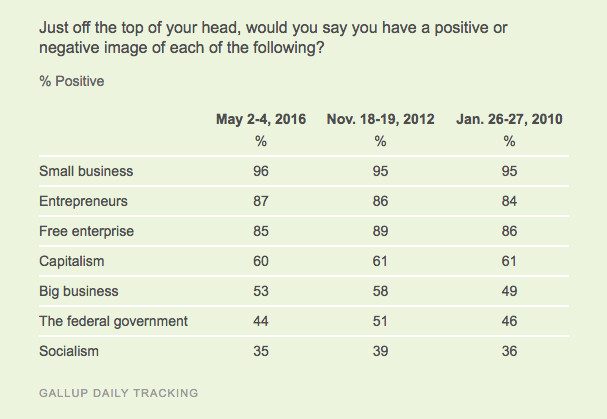 This is great news. Not only is socialism unpopular, but it ranks below the federal government (which traditionally gets low marks from the American people). And the supposed Sanders revolution hasn’t even translated into a relative improvement. This poisonous ideology is actually slightly more unpopular than it was in 2010 and 2012.

Here’s what Yglesias wrote about these numbers.

Any form of left-of-center politics in the United States, frankly, is going to have a problem with the fact that “the federal government” is viewed so much less favorably than cuddly targets like “small business,” “entrepreneurs,” and “free enterprise.” Even big business does better than the federal government. And both big business and capitalism do far better than socialism.

As I said, this is excellent news.

The bottom line is that economic liberty works while left-wing ideologies (all based on coercion) don’t work, so let’s use whatever words are most capable of disseminating this valuable message.