Home Way of Life Firearms Donald J. Trump on the Right to Keep and Bear Arms 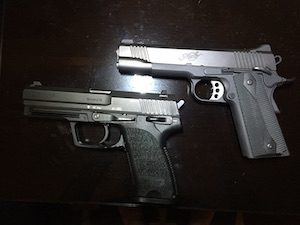 The Second Amendment to our Constitution is clear. The right of the people to keep and bear Arms shall not be infringed upon. Period.

The Second Amendment guarantees a fundamental right that belongs to all law-abiding Americans. The Constitution doesn’t create that right – it ensures that the government can’t take it away. Our Founding Fathers knew, and our Supreme Court has upheld, that the Second Amendment’s purpose is to guarantee our right to defend ourselves and our families. This is about self-defense, plain and simple.

It’s been said that the Second Amendment is America’s first freedom. That’s because the Right to Keep and Bear Arms protects all our other rights. We are the only country in the world that has a Second Amendment. Protecting that freedom is imperative. Here’s how we will do that:

Enforce The Laws On The Books

We need to get serious about prosecuting violent criminals. The Obama administration’s record on that is abysmal. Violent crime in cities like Baltimore, Chicago and many others is out of control. Drug dealers and gang members are given a slap on the wrist and turned loose on the street. This needs to stop.

Several years ago there was a tremendous program in Richmond, Virginia called Project Exile. It said that if a violent felon uses a gun to commit a crime, you will be prosecuted in federal court and go to prison for five years – no parole or early release. Obama’s former Attorney General, Eric Holder, called that a “cookie cutter” program. That’s ridiculous. I call that program a success. Murders committed with guns in Richmond decreased by over 60% when Project Exile was in place – in the first two years of the program alone, 350 armed felons were taken off the street.

Why does that matter to law-abiding gun owners? Because they’re the ones who anti- gun politicians and the media blame when criminals misuse guns. We need to bring back and expand programs like Project Exile and get gang members and drug dealers off the street. When we do, crime will go down and our cities and communities will be safer places to live.

Here’s another important way to fight crime – empower law-abiding gun owners to defend themselves. Law enforcement is great, they do a tremendous job, but they can’t be everywhere all of the time. Our personal protection is ultimately up to us. That’s why I’m a gun owner, that’s why I have a concealed carry permit, and that’s why tens of millions of Americans have concealed carry permits as well. It’s just common sense. To make America great again, we’re going to go after criminals and put the law back on the side of the law-abiding.

Let’s be clear about this. Our mental health system is broken. It needs to be fixed. Too many politicians have ignored this problem for too long.

All of the tragic mass murders that occurred in the past several years have something in common – there were red flags that were ignored. We can’t allow that to continue. We need to expand treatment programs, because most people with mental health problems aren’t violent, they just need help. But for those who are violent, a danger to themselves or others, we need to get them off the street before they can terrorize our communities. This is just common sense.

And why does this matter to law-abiding gun owners? Once again, because they get blamed by anti-gun politicians, gun control groups and the media for the acts of deranged madmen. When one of these tragedies occurs, we can count on two things: one, that opponents of gun rights will immediately exploit it to push their political agenda; and two, that none of their so-called “solutions” would have prevented the tragedy in the first place. They’ve even admitted it.

We need real solutions to address real problems. Not grandstanding or political agendas.

GUN AND MAGAZINE BANS: Gun and magazine bans are a total failure. That’s been proven every time it’s been tried. Opponents of gun rights try to come up with scary sounding phrases like “assault weapons”, “military-style weapons” and “high capacity magazines” to confuse people. What they’re really talking about are popular semi- automatic rifles and standard magazines that are owned by tens of millions of Americans. Law-abiding people should be allowed to own the firearm of their choice. The government has no business dictating what types of firearms good, honest people are allowed to own.

BACKGROUND CHECKS. There has been a national background check system in place since 1998. Every time a person buys a gun from a federally licensed gun dealer – which is the overwhelming majority of all gun purchases – they go through a federal background check. Study after study has shown that very few criminals are stupid enough to try and pass a background check – they get their guns from friends/family members or by stealing them. So the overwhelming majority of people who go through background checks are law-abiding gun owners. When the system was created, gun owners were promised that it would be instant, accurate and fair. Unfortunately, that isn’t the case today. Too many states are failing to put criminal and mental health records into the system – and it should go without saying that a system’s only going to be as effective as the records that are put into it. What we need to do is fix the system we have and make it work as intended. What we don’t need to do is expand a broken system.

NATIONAL RIGHT TO CARRY. The right of self-defense doesn’t stop at the end of your driveway. That’s why I have a concealed carry permit and why tens of millions of Americans do too. That permit should be valid in all 50 states. A driver’s license works in every state, so it’s common sense that a concealed carry permit should work in every state. If we can do that for driving – which is a privilege, not a right – then surely we can do that for concealed carry, which is a right, not a privilege.

Ending Gun-Free Zones On Military Bases: Banning our military from carrying firearms on bases and at recruiting centers is ridiculous. We train our military how to safely and responsibly use firearms, but our current policies leave them defenseless. To make America great again, we need a strong military. To have a strong military, we need to allow them to defend themselves.

In addition to his own words above, President-Elect Trump has promised to look at National Concealed Carry Reciprocity: There is significant momentum towards establishing national concealed carry reciprocity in all 50 states. He says that as driving licenses are recognized federally, so should cancel carry permits be.

Legalizing Suppressors: The Hearing Protection Act is written and has co-sponsors. It would end their use by just criminals and allow high-volume shooters to protect their hearing.

Oh, and he might lift the Executive Order ban on the importation of Collectable Historical Firearms which has been in place under President Obama. Collectors would love to add to their collections of  historically significant firearms provided to allies after the Second World War and the Korean War.