Pumpkins are a wholesome, native squash, rich in the antioxidant, beta carotene. They’re also well known for making guest appearances on front porches every Fall. So before you throw them out to make way for the Christmas decorations, here are a few lesser known uses for Cinderella’s carriage:

Note: When cooking with pumpkin, it’s important to first roast the pumpkin. Poke holes in the top of the gourd to prevent explosions and cook on a cookie sheet at 325 degrees till your pumpkin pierces easily. Cooking times will vary with the size of the pumpkin.

Make your own pumpkin ravioli

salt and pepper to taste

wonton wrappers (a healthy and quick alternative to homemade pasta)

There are any number of recipes out there, but the first step is always to remove the stringy membrane from the inside of the pumpkin. Then, mash or puree and add seasonings. We like to mix pumpkin puree with parmesan cheese, heavy whipping cream, chopped sage and salt and pepper to taste. Next, drop a tablespoon or so of pumpkin filling onto a wonton square, brush around the filling with a mixture of 3 tablespoons cornstarch, mixed with 3 tablespoons cold water, and place a second sheet on top. Press to seal along three sides of the wonton ravioli, then pick it up and squeeze out any excess air before sealing the fourth side. Boil raviolis until they float, then serve with a sauce of your choice. We recommend fresh, diced tomatoes with parmesan and sage to taste. 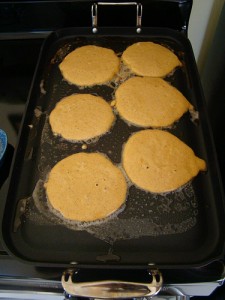 The Squirrel says: Save the seeds and raise more pumpkins; they are notoriously easy to grow. Choose a sunny spot where the pumpkin will have lots of room and plant in late May or early June.

Other facts: Pumpkins also have a number of traditional medicinal uses. The seeds are reputed to fight tapeworm and other intestinal parasites. Taken in three doses ranging from two to five ounces, they supposedly cause the worms to loosen their grasp. There is some scientific evidence for this claim, linking it to an amino acid in the seeds called Cucurbitin.

Also, in the Ukraine, Turkey and Bulgaria, a hand full of seeds per day is taken to prevent or help treat prostate enlargement. Researchers attribute this effect to two unsaturated fatty acids found in pumpkin seeds, oleic and linoleic acid.