Home Evergreen Waiting on a dental appointment for a bad tooth? 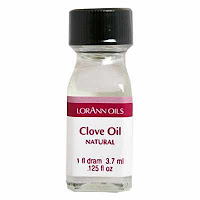 If you have ever had a cavity in which a nerve was exposed you need to read this. Recently I had a tooth break due to terrible dental work from a local dentist here. I figured I would just live with it for awhile since the dentist is expensive. I was fine for a month or so and then it hit me like a brick. It was exposed nerve pain.

I was taking fist full’s of ibuprofen and Tylenol everyday and eventually that stopped helping. When it did help, it did not last very long.  I was going insane, couldn’t sleep or finish dinner most nights.

It was at that time that I decided to search the web for any kind of solution. There is a lot of bunk out there online when it comes to natural or holistic types of remedies. At the end of the day, short of going to the dentist, most of these options do not work. To be perfectly honest, I was in so much pain I was willing to try anything.

A friend told me about clove oil when the tooth first started acting up and I had forgotten all about it until I stumbled on a page which indicated that using clove oil on the area in question will not only clean or disinfect the area, but it could also possibly kill the nerve. Another page suggested that olive oil would dull the pain and also could kill the nerve.  It all sounded so farfetched, but I was desperate.

I went out to the local pharmacy and lucked out because they had two small bottles left. Each bottle cost a dollar or so and it was made by LorAnne’s.

After I found the oil, I went to our local Dollar General and snagged a bottle of olive oil. I think I paid about a buck fifty for it and then I rushed home because my tooth was killing me.

Once home I opened each bottle and mixed them in a glass dropper bottle that I had lying around, after I disinfected the bottle of course. I do not have exact measurements for you, but I estimate that I put in about 5-10% clove oil and the rest was olive oil.

I placed it on my tooth.  If you’re very sensitive to spice or heat you need to know that it is very hot on your gums, cheek and tongue. Deal with it, it is worth it.

After I placed it in I swished it around the area for a minute or so and within less than two minutes my tooth felt better for the first time in weeks. Later that day, I started feeling pain again so I repeated the same method. This time I held it in longer and dealt with the burning sensation. It was at that point that a sharp pain slowly started to build in the bad tooth.  It built up to a point to where I almost couldn’t take it and I went to go spit it out.

By the time I made it to the sink to spit it out, the pain was going away. Ever since that point the pain has not been back at all. I think the sharp pain was the nerve dying off. When I finally got into the dentist I asked him if using this method actually works or if it was just my imagination and he confirmed that it is a great way to alleviate tooth pain in many cases.

So if you are suffering from tooth pain, you might try using this method for relief until you can make it to the dentists.

By Joe Alexander. Joe lives in a log home up a two track in the woods in Michigan. He likes to speak for the average American, like his namesake.