One of the more surreal aspects of the 2016 campaign was watching Bernie Sanders argue that the United States should become more like a European welfare state.

Was he not aware that Europe had major problems such as high unemployment and a fiscal crisis?

Didn’t he know that America’s economy was growing faster (which is a damning indictment since growth in the U.S. was relatively anemic during the Obama years)?

Perhaps more important, didn’t he know that Americans enjoy much higher living standards than their European counterparts? Was he not aware that European nations, if they were part of America, would be considered poor states?

If you don’t believe me, here’s a chart I prepared using the “average individual consumption” data from the Organization for Economic Cooperation and Development. These are the numbers that measure the material well-being of households. As you can see, the United States is far ahead of other nations. Indeed, the only three countries that are even close are two admirable tax havens and oil-rich Norway. 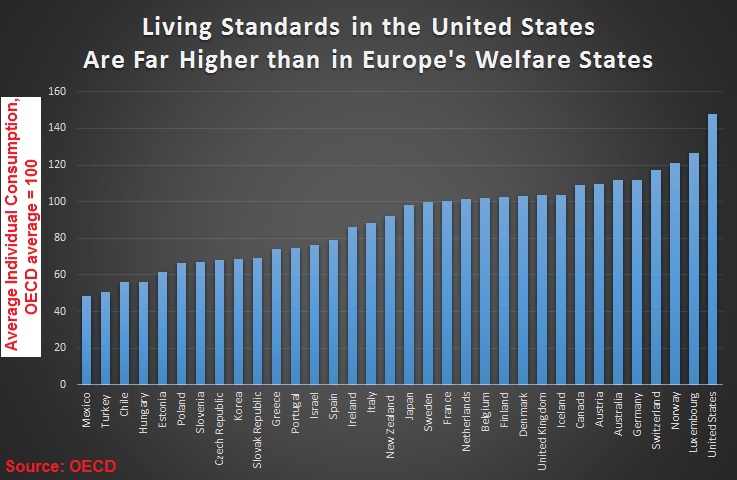 What about Denmark and Sweden, the two nations that Bernie Sanders said were role models? Well, the United States could copy them, but only if we wanted our living standards to drop by more than 30 percent.

By the way, since the OECD is a left-leaning bureaucracy that is guilty of periodically rigging numbers against the United States, you can be confident that this AIC data isn’t structured to favor America.

So why does the United States have such a big advantage?

In a new study from the National Bureau of Economic Research, Professor Martin Feldstein addresses why Europe is lagging the United States.

He lists 10 reasons for the growth gap. Here are the ones that are related to public policy, followed by my brief observations.

(4) Labor markets that generally link workers and jobs unimpeded by large trade unions, state-owned enterprises, or excessively restrictive labor regulations. In the private sector, less than seven percent of the labor force is unionized. There are virtually no state-owned enterprises. While labor laws and regulations affect working conditions and hiring rules, they are much less onerous than in Europe.

Given America’s high ranking in the World Bank’s Doing Business, this makes sense.

(6) A culture and a tax-transfer system that encourages hard work and long hours. The average employee in the United States works 1800 hours per year, substantially longer than the 1500 hours worked in France and the 1400 hours worked in Germany.

The U.S. subsidizes leisure, but not nearly as bad as Europe (think of Lazy Robert).

(7) A supply of energy that makes North America energy independent. The private ownership of land and mineral rights has facilitated a rapid development of fracking to expand the supply of oil and gas.

Apparently the United States is one of the few nations where you own minerals under your land. Good for us.

(8) A favorable regulatory environment. Although the system of government regulations needs improvement, it is less burdensome on businesses than the regulations imposed by European countries and the European Union.

Given the data from Economic Freedom of the World, I’m not sure I believe this.

(9) A smaller size of government than in other industrial countries. According to the OECD, outlays of the U.S. government at the federal, state and local levels totaled 38 percent of GDP while the corresponding figure was 44 percent in Germany, 51 percent in Italy and 57 percent in France. The higher level of government spending in other countries implies that not only is a higher share of income taken in taxes but also that there are higher transfer payments that reduce incentives to work. In the United States, …There is no value added tax. State income taxes vary but are generally about five percent… So Americans have a higher pre-tax reward to working and can keep a larger share of their earnings.

A smaller burden of government spending may be America’s biggest advantage. And that’s connected with our other big advantage, which is not being burdened by a government-fueling value-added tax.

(10) The U.S. has a decentralized political system in which states compete. The competition among states encourages entrepreneurship and work effort and the legal systems protect the rights of property owners and entrepreneurs. The United States political system assigns many legal rules and taxing power to the fifty individual states. The states then compete for businesses and for individual residents by their legal rules and tax regimes. Some states have no income taxes and have labor laws that limit unionization.

We still have some federalism, and that helps.

Overall, Feldstein’s list is impressive, though it fails to note that there are areas where Europe has better policy, such as lower corporate tax rates, lower death taxes, private postal services, and private infrastructure. There are even European nations with school choice and private retirement accounts.

Notwithstanding these attractive features, Feldstein is right about more economic liberty in the United States.

And that helps to explain higher living standards in America.

What makes this especially noteworthy is that convergence theory says that poorer nations should automatically catch up to richer nations. Yet Europe’s catch-up period came to halt in the 1980s and the continent has since been losing ground.

And for fans of apples-to-apples comparisons, it’s very illuminating that Americans of Scandinavian descent earn about 40 percent more than those who didn’t emigrate and still live in Scandinavia.