Plants are valuable sources of food because they are widely available, easily procured, and, in the proper combinations, can meet all your nutritional needs.

Absolutely identify plants before using them as food. Poison hemlock has killed people who mistook it for its relatives, wild carrots and wild parsnips.

At times you may find yourself in a situation for which you could not plan. In this instance you may not have had the chance to learn the plant life of the region in which you must survive. In this case you can use the Universal Edibility Test to determine which plants you can eat and those to avoid.

It is important to be able to recognize both cultivated and wild edible plants in a survival situation. Most of the information in this chapter is directed towards identifying wild plants because information relating to cultivated plants is more readily available.

Remember the following when collecting wild plants for food:

You identify plants, other than by memorizing particular varieties through familiarity, by using such factors as leaf shape and margin, leaf arrangements, and root structure. 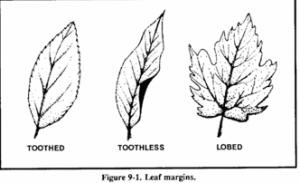 The basic leaf margins (Figure 9-1) are toothed, lobed, and toothless or smooth. 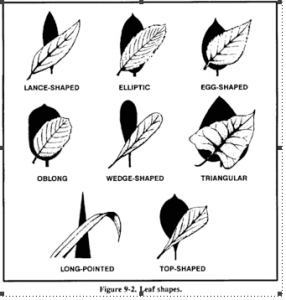 The basic types of leaf arrangements (Figure 9-3) are opposite, alternate, compound, simple, and basal rosette. 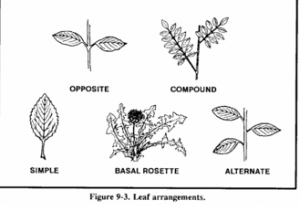 The basic types of root structures (Figure 9-4) are the bulb, clove, taproot, tuber, rhizome, corm, and crown. Bulbs are familiar to us as onions and, when sliced in half, will show concentric rings. Cloves are those bulblike structures that remind us of garlic and will separate into small pieces when broken apart. This characteristic separates wild onions from wild garlic. 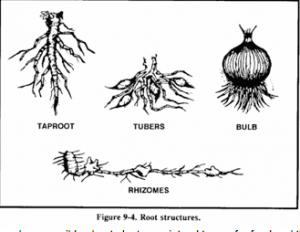 Taproots resemble carrots and may be single-rooted or branched, but usually only one plant stalk arises from each root. Tubers are like potatoes and daylilies and you will find these structures either on strings or in clusters underneath the parent plants. Rhizomes are large creeping rootstock or underground stems and many plants arise from the “eyes” of these roots. Corms are similar to bulbs but are solid when cut rather than possessing rings. A crown is the type of root structure found on plants such as asparagus and looks much like a mophead under the soil’s surface.

Learn as much as possible about plants you intend to use for food and their unique characteristics. Some plants have both edible and poisonous parts. Many are edible only at certain times of the year. Others may have poisonous relatives that look very similar to the ones you can eat or use for medicine.

There are many plants throughout the world. Tasting or swallowing even a small portion of some can cause severe discomfort, extreme internal disorders, and even death. Therefore, if you have the slightest doubt about a plant’s edibility, apply the Universal Edibility Test (Figure 9-5) before eating any portion of it.

Before testing a plant for edibility, make sure there are enough plants to make the testing worth your time and effort. Each part of a plant (roots, leaves, flowers, and so on) requires more than 24 hours to test. Do not waste time testing a plant that is not relatively abundant in the area.

Remember, eating large portions of plant food on an empty stomach may cause diarrhea, nausea, or cramps. Two good examples of this are such familiar foods as green apples and wild onions. Even after testing plant food and finding it safe, eat it in moderation.

You can see from the steps and time involved in testing for edibility just how important it is to be able to identify edible plants.

To avoid potentially poisonous plants, stay away from any wild or unknown plants that have–

Using the above criteria as eliminators when choosing plants for the Universal Edibility Test will cause you to avoid some edible plants. More important, these criteria will often help you avoid plants that are potentially toxic to eat or touch.

An entire encyclopedia of edible wild plants could be written, but space limits the number of plants presented here. Learn as much as possible about the plant life of the areas where you train regularly and where you expect to be traveling or working. Listed below and later in this chapter are some of the most common edible and medicinal plants.

One plant you should never overlook is seaweed. There are no known poisonous seaweeds although you should check for marine life attached to it. There are some edible freshwater varieties. Seaweed is a valuable source of iodine, other minerals, and vitamin C. Large quantities of seaweed in an unaccustomed stomach can produce a severe laxative effect.

When gathering seaweeds for food, find living plants attached to rocks or floating free. Seaweed washed onshore any length of time may be spoiled or decayed. You can dry freshly harvested seaweeds for later use.

Its preparation for eating depends on the type of seaweed. You can dry thin and tender varieties in the sun or over a fire until crisp. Crush and add these to soups or broths. Boil thick, leathery seaweeds for a short time to soften them. Eat them as a vegetable or with other foods. You can eat some varieties raw after testing for edibility.

Although some plants or plant parts are edible raw, you must cook others to be edible or palatable. Edible means that a plant or food will provide you with necessary nutrients, while palatable means that it actually is pleasing to eat. Many wild plants are edible but barely palatable. It is a good idea to learn to identify, prepare, and eat wild foods.

Methods used to improve the taste of plant food include soaking, boiling, cooking, or leaching. Leaching is done by crushing the food (for example, acorns), placing it in a strainer, and pouring boiling water through it or immersing it in running water.

Boil leaves, stems, and buds until tender, changing the water, if necessary, to remove any bitterness.

Boil, bake, or roast tubers and roots. Drying helps to remove caustic oxalates from some roots like those in the Arum family.

Leach acorns in water, if necessary, to remove the bitterness. Some nuts, such as chestnuts, are good raw, but taste better roasted.

You can eat many grains and seeds raw until they mature. When hard or dry, you may have to boil or grind them into meal or flour.

The sap from many trees, such as maples, birches, walnuts, and sycamores, contains sugar. You may boil these saps down to a syrup for sweetening. It takes about 35 liters of maple sap to make one liter of maple syrup!