Home Government Corruption The Deep State – Is it time to fire them all? 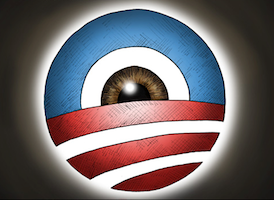 So, apparently, the President’s conversations with foreign leaders, including the President of Mexico and Prime Minister of Australia, were recorded and/or transcribed by National Security Council staff, subsequently classified and then illegally leaked to the Washington Post.

As the government leaks like a sieve we look at the Deep State. This is defined as a political conflict between a nation’s leader and its governing institutions. In this case, the Deep State is being run by leftists loyal to President Obama who are repulsed by the actions of President Trump despite having sworn fealty to him when he was inaugurated as Chief Executive.

This might be the straw that breaks the camel’s back. And not for President Donald Trump, who ultimately makes personnel decisions at the White House, but for those who may have finally, simply gone too far.

For goodness’ sake, the President cannot even have a conversation with leaders in Mexico about the wall or Australia about dumping their refugees into the U.S. without it being leaked by his own staff to sabotage the administration’s policies on immigration and refugees.

There is a clear pattern. The leaks are all in the direction of opposing Trump’s agenda.

Under the Constitution, we have one executive for a reason. That includes the conduct of foreign relations. To the extent that the leaks make it more difficult for the President to discharge his constitutional responsibilities dealing with foreign leaders, they undermine national security.

Other examples include attempts to carry on relations and to ratchet down tensions with Russia. Then-incoming National Security Advisor Michael Flynn’s conversation with former Russian Ambassador Sergey Kislyak was intercepted in December and then leaked to the Washington Post in January.

Some of the content of Trump’s meeting with Kislyak and Russian Foreign Minister Sergey Lavrov — including discussion of active global terrorist threats affecting both countries — in the Oval Office was leaked to the Washington Post in May.

Some of the substance of the conversation of Trump’s senior advisor and son-in-law Jared Kushner with Kislyak during the transition period on Nov. 16, 2016 was leaked to the Washington Post from intercepted communications by U.S. intelligence agencies.

These are all clearly designed to sabotage the President’s attempts at détente with Russia, something he campaigned on in 2016. As if Trump was the first president to ever attempt that. You have to basically ignore Eisenhower, Kennedy, Nixon, Carter and Reagan — most of the Cold War — who at various intervals, set the stage for first dialogue, establishing direct lines of communication to deescalate the possibility of nuclear exchange, then limiting strategic arms and finally, reducing them. These used to be heralded as diplomatic accomplishments. Now every well-intentioned overture is treated as collusion and treason.

Incidentally, these three issues, Trump’s positions on the wall with Mexico, refugees and Russia were part of what set him apart on foreign policy from the other candidates who ran in 2016. Here’s the key. Taking those positions, Trump won the majority of the Electoral College in November. Trump deserves the chance to pursue those policies under the Constitution. Instead, he is being undermined by his own staff at the White House. This is unacceptable and inexcusable.

That is why Trump must simply fire the National Security Council staff in its entirety and start from scratch. Nobody can be trusted. There’s just no other way to be certain that the leaks will stop.

In addition, it is long overdue that Trump cut all former presidents and their designees out of the loop of classified information under federal rules and by revising Executive Order 13526, something Americans for Limited Government President Rick Manning called for in early March, saying “They have no need to know.”

The case for doing so now appears all but irrefutable, particularly after it was revealed by Circa.com’s Sara Carter on August 3 that in late April that National Security Advisor H.R. McMaster had granted a continued security clearance to former National Security Advisor Susan Rice — weeks after it was reported by Bloomberg View’s Eli Lake that she was at the heart of the unmasking scandal by the former Obama administration targeting the opposition party during the 2016 election campaign.

Despite the fact that Rice had been fingered in the unmasking scandal weeks earlier, according to Carter, “Trump was not aware of the letter or McMaster’s decision, according to two Senior West Wing officials and an intelligence official, who spoke to Circa on condition that they not be named.”

This is the part where the American people can hope that perhaps Trump has simply been playing dumb with McMaster, carrying on like he has no clue what’s happening with the leaks or why, and in the meantime has developed a strategy to survive these machinations. Hopefully the gloves are about to come off.

Robert Romano is the Vice President of Public Policy for Americans for Limited Government.