Home Around the House Keeping Halloween Old School – With Apples. 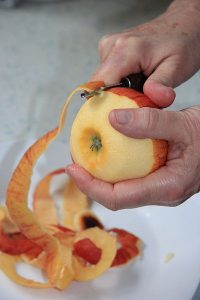 Apple bobbing, also known as bobbing for apples, is a game often played on Halloween. It’s an easy game and kids love it! Just fill a tub or a large basin with water and put apples in. Because apples are less dense than water, they will float at the surface. Then try to catch one with your teeth. Use of arms is not allowed, and often are tied behind the back to prevent cheating.

In Scotland, this may be called “dooking (i.e., ducking). In northern England, the game is often called apple ducking or duck-apple. In Ireland, mainly County Kerry, it is known as “Snap Apple”, and in Newfoundland and Labrador, “Snap Apple Night” is a synonym for Halloween. (To find out what the Welsh called it go here. And see how adding a lighted candle to the mix livens things up.)

When I was a kid we played the “dry” version where you run a piece of twine through an apple and hang it from a tree bough. Then, with our hands behind our backs we had to try and bite and eat the apple. It’s just as difficult as the bobbing version but without the drowning and saliva-swapping options.

The specific connection between apples, fortune-telling and Halloween goes back to the Celtic festival Samhain. It fell at the end of our modern October, the old Celtic New Year (Hogmanay in Scottish and Halloween are related words meaning the last night of the year).

To encourage the sun God to return the next year, ancient Celts burned huge bonfires into the night and tied apples to evergreen branches. Apples, being fruits that last through the Winter if stored correctly, were synonymous with plenty.

I remember as a child, in the old Celtic community where I grew up, peeling an apple to get as long a piece of skin as possible and then throwing it over my shoulder to see what initial lay on the ground. Tradition had it that you would marry a person whose name began with that letter. I’m not sure it was very accurate as I sure never threw a “W”.

And our latest apple tradition? It’s believed that candy apples were first made in 1908 by William Kolb, a candy maker from Newark, N.J. 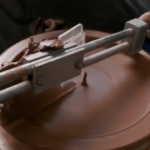