Home Evergreen “That’s not a croc, THIS is a croc!” 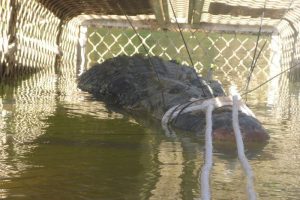 Australia has some enormous crocodiles.

An elusive monster crocodile, thought to be one of the biggest on record, has been captured in the Northern Territory after a decade-long game of hide-and-seek.

Measuring 4.7 metres (15.4ft) and weighing in at up to 600 kilograms, the snappy saltie was trapped by rangers in Taylor’s Park, around 60 kilometres downstream from the Top End town of Katherine.

PHOTO: The crocodile is thought to be the largest reptile removed from Katherine. (Supplied: NT Parks and Wildlife)

Authorities have been hunting the “big fella” for close to 10 years to no avail — until now.

“We’ve called it a lot of things over the years because it’s been so hard to catch,” senior wildlife officer John Burke quipped.

The game of hide-and-seek came to an end when the legendary lizard unwittingly swam into a trapping operation, set around two weeks ago.

In June 2018, a 15.4ft crocodile carried off a man from a boat in Australia. Rangers discovered human remains inside the beast when they tracked it down and killed it.