The long-horned tick, Haemaphysalis longicornis or Asian tick is capable of reproducing at remarkable speed and gorging on so much blood that it kills itself. It’s the first new species of tick to be found in the U.S. in 50 years, the New York Times reports. It feeds on a host such as livestock, poultry, wild birds, pets, small mammals and humans.

Since it was first seen infesting the ear of a sheep in Hunterdon County, New Jersey (story below), it has since been found in many suburban areas and it has been found in eight states — New Jersey, West Virginia, Virginia, Arkansas, North Carolina, New York, Pennsylvania, and now Maryland.

Experts say the longhorned ticks found in the United States — including the tick confirmed in Maryland and those in Virginia — have not been found to carry infectious pathogens, although in Asia, the species carries a virus that is fatal for 15 percent of its victims. No human disease has yet been found in the insects discovered in the U.S, though health experts told the New York Times they are concerned.

ORIGINAL REPORT – April 23 2018
If the usual suspects weren’t bad enough, New Jersey has reported incidents of Haemaphysalis longicorns, a nasty new tick that carries Japanese spotted fever and other diseases, many deadly. The worse news is it survived the winter.

The longhorned tick (Haemaphysalis longicornis), also known as the bush tick or cattle tick, is a known livestock pest, especially in Australia and New Zealand, and can transmit a disease called theileriosis to cattle but not to humans. These ticks are common on dogs and farm animals. The New Jersey incident that triggered the discovery that these pests had entered the USA, occurred on a sheep that was the only animal on the farm and had never traveled. Female long-horned ticks can lay 800 to 2,000 fertile eggs at one time without mating once. 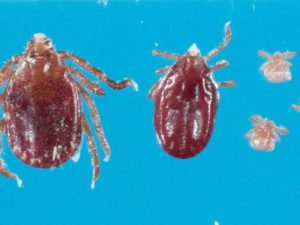 The tick lives on mammals and birds. It spreads quickly in farm animals such as cattle, horses, sheep, pigs, and chicken. Natural infestations have been found on wild animals like bear, deer, foxes, hares, and small mammals like rats, ferrets, and birds, the latter hosting the ticks. The tick has been found on cats, dogs, and humans.

According to nj.com “Last summer, a farmer walked into the Hunterdon County health office covered in thousands of the ticks after she was shearing a 12-year-old Icelandic sheep named Hannah. Experts were called in to identify the tick which was not previously known to exist in the United States. The Department of Agriculture says it still does not know how the tick made its way to New Jersey.”

The New Jersey Department of Agriculture has announced that the East Asian tick, also known as Longhorned tick or the bush tick, which was discovered on a Hunterdon County farm last year, has survived the winter.

SFTS* has also been shown to be transmitted via Haemaphysalis longicornis.

This invasive species needs to be monitored. If anyone spots it they should call it in to the CCD. 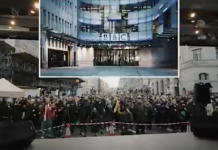