A huge storm in Australia’s north on Sunday flushed out a sight which either fascinated or horrified those who saw it – 10 cane toads riding the back of a 3.5m python.

A farmer in far north Western Australia has captured the bizarre sight of a knot of cane toads hitching a ride on a snake in the middle of the night.

Paul Mock was checking the dam on his farm outside Kununurra near the Northern Territory border when he came across the hitchhiking amphibians.

An overnight deluge meant he had to get up around 1:30am to drop the dam’s spillway, when he saw water had risen so far it had forced thousands of cane toads to seek higher ground.

“I noticed because the water was so high, that it had flooded all the burrows of the cane toads which live around the edge of the lake underneath the lawn. So they were all on top of the lawn, thousands of them,” he said.

He then went to investigate the other side of the dam in case the deluge had washed out the road, when he discovered the slithering toad transporter. More here.

68mm just fell in the last hour at Kununurra. Flushed all the cane toads out of my brothers dam. Some of them took the easy way out – hitching a ride on the back of a 3.5m python. pic.twitter.com/P6mPc2cVS5 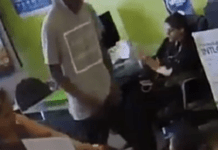