The American economy is booming, thanks to tax cuts and a halt to the Obama onslaught of regulations.

But two leading economic indicators reveal the boom may be going bust, and what appears to be a global economic slowdown is about to crash over the United States.

Business Insider reports data on freight shipments in the U.S. show a “dramatic” plunge in the amount of goods retailers are stocking and shipping — a sign they are preparing for an economic downturn.

As the people who ship the goods retailers stock months in advance, trucking companies are on the front lines of consumer demand.

But that’s not the only sign there may be trouble on the horizon.

Manufacturing, which was growing rapidly in recent months, suffered a dramatic collapse in June.

“The Empire State manufacturing index plummeted 26.4 points to negative 8.6 in June, the New York Fed said Monday. That’s a record decline. Economists had expected a reading of positive 10, according to a survey by Econoday,” MarketWatch reports. “Any reading below zero indicates a contraction in activity. The last time the index was negative was in October 2016.”

The two may be signs economic growth is about to contract.

Are you prepared for a recession? 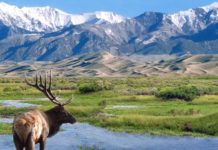