A group of New Jersey fisherman fishing got more than they bargained for when an 18-foot long, 2000-pound great white shark decided their small boat offered the perfect snack.

The men were participating in a mako shark fishing tournament and had their cellphones taping when the massive shark charged the boat, snatching its huge bait bag in one bite. None of the men were injured in the rare and dangerous frenzy.

“We’ve fished for sharks a lot and never seen anything like that. We were amazed by how big it was,” Capt. Jeff Crilly, tells the Asbury Park Press. “It was harder to guess the weight because we had nothing to compare it to, but it was probably about 2,000 pounds.”

The one-ton estimate may be low.

“The length of the shark is the same as social media sensation Mary Lee the Shark, a tagged great white shark that weighed 3,500 pounds in 2012 when researchers put a satellite tag on her,” the Press reports. 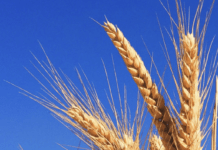 U.S. spring wheat planting down as rest of world sweats on Ukraine 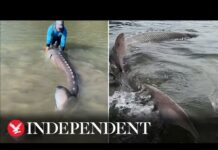