A Florida man “triggered” by the sight of an American flag was arrested while on his way to an elementary school, where he planned to kill as many children as possible in a mass stabbing.

Hillsborough County sheriff’s deputies, tipped off by a roommate, quickly arrested 22-year-old Andrew Ivan Aman. He was carrying a large knife in a bag and was en route to the school when he was intercepted.

Aman told them he plotted the attack on Tampa’s Francis Bellamy Elementary school because of its “obnoxious pride in America” as “illustrated by the large American flag mural” displayed outside the school.

“He disliked the school because the exterior of the building is painted like an American flag and he has negative views of patriotism towards the United States,” the Hillsborough County Sheriff’s Department reports. The school is named after the author of the Pledge of Allegiance, who once lived in Tampa.

The planned attack appears to be a copycat of a 2010-2012 series of mass stabbings at schools in Communist China, where guns are banned, which left 25 children and teachers dead. 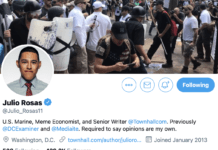 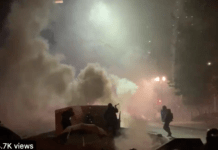 She’s Been on the Ground Covering Portland Protests. Here’s What She’s Seen.